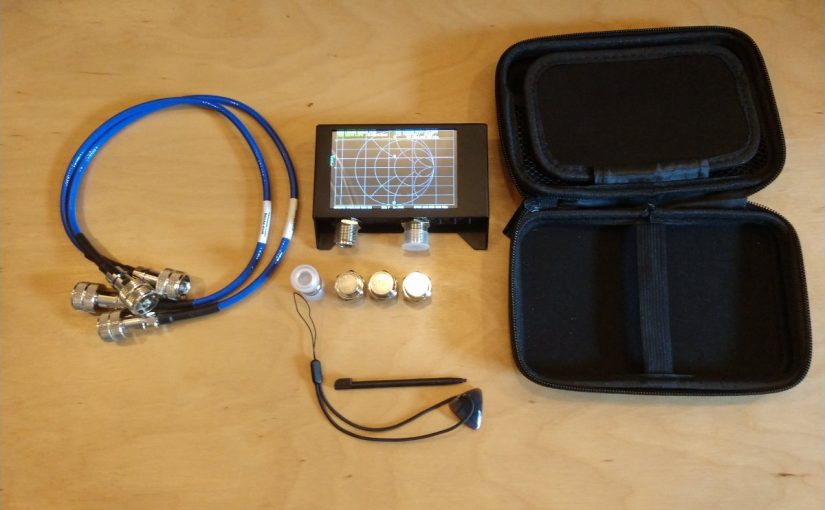 Recently, I pried open my wallet and plunked down the sum of $150.00 for one of these little devices. Now, to be certain, this is not a replacement for a real VNA, especially at a high power broadcast site. However, it can be used for basic trouble shooting and I have had a good deal of fun fooling around with it.

The unit I purchased came with a small carrying case, calibration loads and test jumpers. The software is downloadable and is easily configured.

What I really like about it is the internal battery and the touch screen.

So what can it be used for?

Pretty much anything you need to know about RF antennas, filters and transmission lines can be learned with a VNA. One thing to keep in mind; the measurement points are limited, especially in the stand alone mode. Thus, the smaller the frequency span, the better the measurement resolution will be.

While this is a very inexpensive device designed mainly for Amateur Radio, it can be useful to diagnose antenna and transmission line problems. Would I depend on it to make precise measurements? No. Especially things required by the FCC like base impedance measurements on an AM tower or channel filter measurements for a TV station. Would it work at a high RF transmitter site with multiple AM/FM/TV transmitters? No and chances are you might burn out the front end. Those types of things are best done with professional equipment that has much better accuracy and resolution.

It is a pretty good little tool for basic troubleshooting. One can look at the individual components of an AM ATU for example, or measure the input impedance to see if there has been a shift (should normally be 50 ohms). It is small enough that it can be included in a basic tool kit. It is self powered. Not bad at all for the price.

Working with RF can produce some head scratchers.  Most transmitter manufactures tend to use the same type of connector for things like exciter RF outputs and composite inputs.  Over the years, I have become well stocked with all sorts of BNC and Type N connectors.  Satellite equipment uses Type F connectors, Analyzers use Type N, Oscilloscope uses BNC,  GPS equipment uses SMA and so on.  Except when they don’t.  As any good engineer will tell you, when they don’t will be in the middle of the night at some mountain top location while the station is off the air.

After one such incident, I invested in a TPI-3000A adaptor kit.  This kit has both the male and female versions of Type N, F, SMA, BNC, TNC, UHF, UHF mini and RCA.  They can be mated in any combination using the Universal interface.

On more than one occasion, this little kit has meant the difference of between being back on the air or driving down the mountain to look for an in between series adaptor.  A couple of recommended additions include a 7/8″ and 1 5/8″ EIA flange to type N male.

They can be a little pricey, however, I have seen several for sale on eBay for less than $100.00.  The key to not loosing the various little parts to this kit is to write a little note detailing the date and location where the adaptor was used,  then stuff it in the empty hole.  Hopefully, when permanent repairs are made, the adaptor will be retrieved.