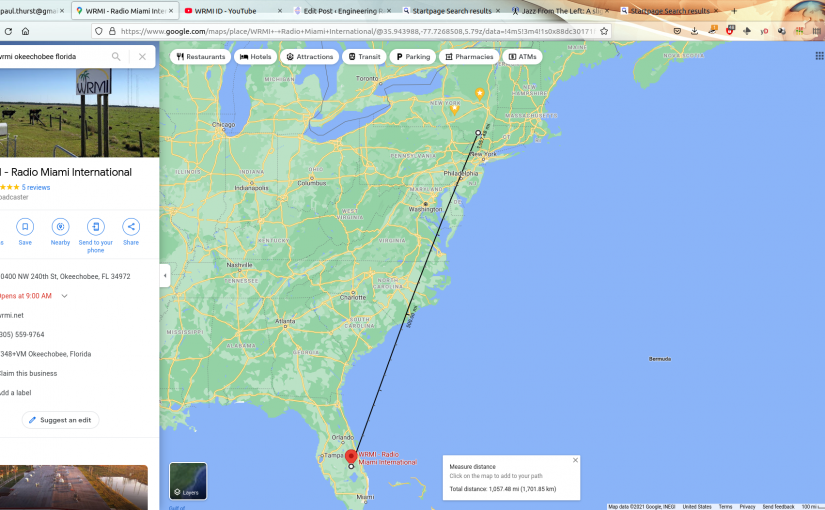 I just finished a full alignment of my Kenwood R-2000 receiver and tonight I am treated with the pleasing tones of “Jazz from the Left,” on WRMI. Jazz from the left means the west coast sound, aka Smooth Jazz as I am given to understand. I spent some time on the west coast and beyond. I have fond memories of those years.

It is amazing to me still, that a simple AM receiver demodulating +/- 4.5 Khz audio bandwidth from 1,057 miles (1701 km) away can sound that good. That is being received directly; no Internet Service Provider, no satellite service, just a transmitter and a receiver.

There is an art to all this, which is being forgotten. A few minutes with a manual, a volt meter, a tone generator and a non-conductive screw driver can bring something that was neglected back to life sounding as good as the day it left the factory 35 years ago. Try that with with your very expensive iPhone 10,000,000x! Of course, you will need those tiny pentalobe tools to get the screws out. Apple would rather you return your expensive i device to their expensive i store so that their i geniuses can fix it for you.

I don’t know, maybe I am an old fart. Perhaps the right to repair the appliances that I purchased and therefore should own is an old fashioned point of view. After all, all of these corporations have my best interests at heart, right?

I recommend you support your not so local shortwave stations by listening and supporting their programmers. Even in 2021, there are still many shortwave broadcasts that are worth listening to!

Family Radio’s WYFR shortwave service will be ending on June 30, 2013.

Shortwave transmitting is very expensive, and no doubt, competing IP distribution technology and diminishing returns on such investment must play a factor in this decision.  Family radio has been struggling ever since the world did not end as predicted in 2011.

Kind of sad to see them go, I don’t know what their plans are after June 30.

This is one of those posts that I started long ago and never finished. No time like the present to do the final revision and get it out there.

I have acquired one of those broad banded software defined radios, an Icom PCR-1000 to be precise, and all is well.  I am enjoying listening to various MF, HF and VHF radio stations.  However, there is a slight problem.  Very slight, almost too small to even mention, more of an inconvenience than a problem.  Still, if I am being inconvenienced, than others are too.  This issue is with the antennas.  My K9AY antenna works wonderfully from 500 KHz to 25 MHz or so.  My discone antenna works wonderfully from about 30 MHz all the way up to about 1 GHz.  In order to enjoy the full range of the receiver, I need to switch antennas.  I have a small switch on my desktop, but it seems inconvenient to reach over and switch it when going from the AM band to the FM band or something similar.  Therefore, I have decided that I need an HF/VHF receiver diplexer.  One would think that such hardware is ready made for such instances.   However, nothing I could find commercially would do the trick.

Thus, since I could not buy one, I decided to build one to add to my collection of receiver doo-dads and nick knacks.  The design is relatively easy, a back to back low pass/high pass filer system with a 50 ohm impedance throughout.  Something with a sharp cut off around 30 MHz or so:

Then it comes down to the building. Since this is going to be used in the UHF range, care and attention needs to be paid to the layout of the components and the design of the circuit board.  Some of those capacitance values are not standard, however, by using two capacitors in parallel, one can get pretty close.  Since this is going to be used for receiving only, I may be splitting hairs, however, I have found that well designed and built equipment is worth the extra effort.

I tried to keep the traces as close to 50 Ohm impedance as possible.

The input and output RF connectors are whatever the builder wants to use, however, I would recommend at least BNC or type N for the VHF/UHF side.  My unit has all type BNC female connectors.   Parts list:

I chose a smallish, diecast aluminum case, which matches my other receiver gear.  The circuit board noted above is 2.9 x 1.7 inches, which is a little bit small.  I used 18 gauge wire between the input/output connectors and the board.

The inductors were made by hand.  I used a small screwdriver as a winding form, making the turns tightly then spreading them out to the proper distance.

The most expensive part was the circuit board, which cost about $16.00.  The rest parts were about $18.00 including shipping.

I have installed this already and it works great. I will need to get the spectrum analyzer out and run some signals through the various ports to see the attenuation and 3 db roll off points.

In yet another example of government sponsored international broadcasting ending, Radio Canada International calls it quits after 67 years.  Effective June 24, all broadcasts from RCI’s Sackville shortwave relay site will cease.  All satellite distribution will end and seventy five percent of the RCI workforce will be laid off.  This means the end of almost all RCI original content.  The good news, according to the press release, is that RCI will continue on webcasting.

This is due to budget cuts to the CBC, which administers RCI.  The Canadian Parliament cut the RCI budget from $12.3 million CAD to $2.3 million CAD for 2012.  This cut in expenditures is saving each Canadian resident approximately $0.35 CAD per year.

Thus, this weekend is the last chance to hear RCI or CBCNord Quebec on any HF frequency.

I listened to RCI for many years, until they drastically reduced their English language shortwave broadcasts to North America in 2006.  Simply put, HF broadcasters are folding up shop and moving toward web based distribution networks.  Those HF transmitters are expensive and they do not maintain themselves.

One drawback of this scheme is government censorship.  It is very easy to the government to block access to sites via internet firewalls.  It is very difficult to completely jam a radio station.

And perhaps those considerations are not important.

I wonder what will happen to their transmitters after sign off?  According to the wikipedia article there are nine HF transmitters in use, with power levels ranging from 100-300 KW.  They are likely to be hauled away and scrapped, the building torn down.