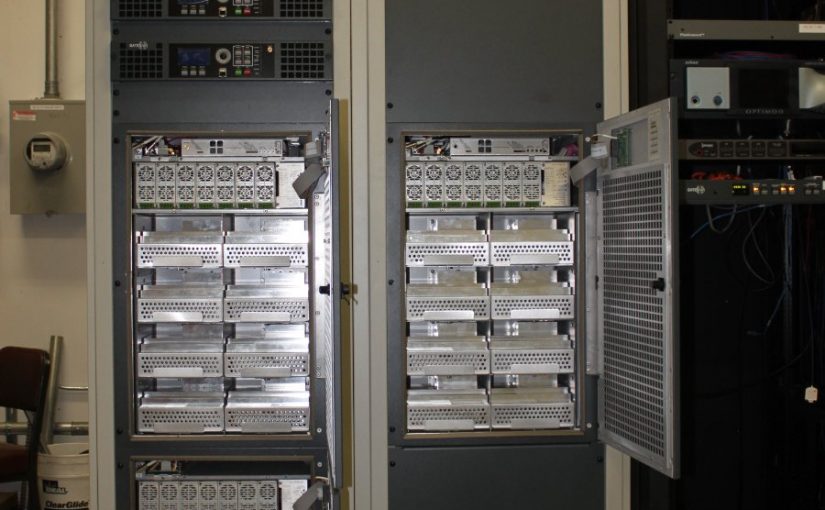 This is the second time I have installed one of these liquid cooled transmitters. This time, it is for WVPS in Burlington, VT. WVPS is the flagship station for Vermont Public Radio. The station is a full class C, a rarity in the North East. The transmitter is located on Mount Mansfield giving it a HAAT of 2,717 feet (828 Meters), which is a good ways up.

This transmitter replaced the previous backup transmitter, a Harris Z16 unit from the early 00’s. There was nothing really wrong with this unit, it just was not a full power backup.

The new transmitter came in two pieces, which is typical for the 30 and 40 KW GatesAir liquid and air cooled transmitters.

For the cooling part of this installation, 1 1/2 inch type M copper pipe was used. This matches most of the other TV transmitters down the hall. In the same building are the transmitters for WCAX-TV, WPTZ-TV, WFFF-TV, and WVNY-TV.

The highest point in the liquid cooled system is the air purge valve and distribution manifold just above the transmitter. From here, everything slops down to a few low points; the heat exchanger outside, the pump station and the power blocks. This is to make it easier to drain, if that ever needs to happen. There is also an air inlet valve to aid in draining.

All of the cooling work is controlled by the pump station. The fans are connected to VFD modules, which control the flow of air though the Heat Exchanger.

All of this plumbing work was greatly sped along with the use of this Pro Press pipe press tool. This thing is great! No more sweating connections. Dry fit a section to make sure that it is all cut correctly, then go to work with this and it is done in a matter of seconds. Of course, there are no re-dos, so the dry fit procedure is a little more important.

Final system checks, remote control test, and HTF top off and the transmitter is ready to go pending the HD Radio installation.

I am a little nervous about turning it off to clean the cabinet.

We have a spare on the shelf for the eventual replacement of this tube, but I really want to see how long this thing will last.  This is also one of the last tube transmitters we have in main service.  There are several backup tube transmitters still around.

The GatesAir FLX-40 transmitter is my first liquid cooled transmitter installation.  Previously, I have installed an air cooled Nautel NV-40, a V-40 and a couple of BE FM-35T/20T units.  The WEBE transmitter site in Bridgeport, Connecticut is an interesting facility.

This coal fired power plant smoke stack which currently holds up the six bay, half wave spaced Shively antenna.  The old BE FM35A transmitters are getting little bit long in the tooth.  Thus, we picked one to scrap, the other will be kept for backup service.

We saved a whole bunch of parts to keep the other FM35A on the air in backup service.

The power supply cabinet with that 500 pound plate transformer was the last to go.

The FLX-40 came on a large truck.  Fortunately, we were able to open the side gate at the power plant and get the truck to the front door of the transmitter building easily.  The transmitter consists of two large cabinets, each with two 10 kilowatt power blocks.  There is also a pump station and an outdoor heat exchanger.

This transmitter design is based on the Harris digital TV transmitters.

The pump station and heat exchanger are the same systems used for TV transmitters.  Liquid cooled units require a bit more planning on the installation end.  The coolant piping should have a high spot from which everything else slopes down hill.

I put a 1/4 to 12 inch pitch on everything.  Of course, there are several low points, the heat exchanger, pump station and bottom power blocks.

After assembling the cooling system, we pressure tested it for 24 hours.

Following that, we flushed the system with distilled water for several hours before we filled it with 40/60 glycol/water mix. Record low temperature in Bridgeport is -7 F (-22 C), thus a 40/60 mix will give protection down to -15 F (-26 C). The more water in the coolant, the better heat transfer capacity it has.

The pump station is controlled by the transmitter, which speeds up the pumps according to how much heat needs to be moved. In turn, the pump station control the fan speed on the heat exchanger outside.

The pump station runs with one motor most of the time. The other pump motor will run in the event of failure or if there is not enough flow through the power blocks. Each of the four power blocks has a flow rate meter on the return line.

GatesAir 50 KW heat exchanger mounted on concrete pad behind the building. Air flows out from the motor side.

As with most things, some assembly required.  The RF modules needed to be placed in the power blocks according to their serial numbers on the test data sheet.  This insures that the information on the test data sheet matches the installed transmitter configuration.  The power combiner between the two cabinets as well as the reject load and directional coupler all need to be installed.

We ran the transmitter for several hours into the antenna yesterday afternoon. The coolant system is still purging air, so we periodically needed to add water/antifreeze to the pump station to keep the pressure between 12-18 PSI. Eventually, the TPO will be 34 KW with the HD carrier(s).

All in all, I would say that this was a fun project. The liquid cooled transmitter had a few extra steps during the installation process, but not too difficult.

This is the second Gates Air FAX-10 that I have installed. This one is in the shipping container transmitter site from the previous post of the same name.  In this case, we dispensed with the equipment rack that came with the transmitter and installed it in a standard Middle Atlantic rack.   The Harris rack configuration wastes a lot of space and since space is at a premium, we decided to do it our own way.

The bottom of the rack has the transmission line dehydrator. The top of the rack has the Dielectric A60000 series 1 5/8 inch coax switch, a Tunwall TRC-1 switch controller and the Burk ARC-16 remote control.  I cut the rack panel top to accommodate the coax switch.  The racks were removed from an old studio site several years ago and were in storage since that time.

The Gates Air FAX-10 transmitter on the air, running a sports-talk format.

View from the other side showing the test load and BE FM10-B transmitter.  This transmitter had a problem that I have run into before with BE FM transmitters.  The jumper between the exciter and IPA had the wrong phase rotation causing reflected power.  I added a foot to it’s length and that problem disappeared.