The receivers sent last December and January have arrived safely and have been distributed. There are still at least two packages in transit and another on my kitchen counter waiting to go out.

Good afternoon! Reporting on the radio Yesterday we distributed 27 receivers in the villages. People were very pleased, because it is expensive for old people to buy such a device. They cost about $20 right now. For the village, this is a lot of money. The remaining 13 radios I gave to my friend Anton (he is on video). He works for the International Medical Corps and often visits front-line villages, where there is no communication or electricity at all. He will distribute radio in such places. Give Paul a huge, huge thank you from the old folks! Here is a video from yesterday’s trip https://t.me/yukhnovets_r/813 I see on the application that one package has not yet arrived. I’m waiting for it and I’ll write to you right away Dyakuyu!❤️

Returned from the villages The ground froze again, so we reached all the addresses. In addition to the reinforced food package, they brought radios to the old people, which Paul sent from the USA, for which many thanks to him! This is really a super important thing in a permanent blackout. Most of the radio was distributed, Anton will take the rest to the de-occupied villages of the Kharkov region Grandmother Katya timidly asked me to find some scraps of boards for her so that she could put together a shed and start chickens in the spring. Her past farm was completely burned down. Let’s make her a shed for sure Grandfather Pasha, like a child, was delighted with the radio. His last receiver fell and stopped working. Now he will follow the news from the front around the clock Two grandmothers of a neighbor were more impressed not by the opportunity to listen to the news, but by music radio stations. We will, he says, dance both in the hut and in the garden in the spring Grandmother Vera from Bervitsy cooked zrazy with cabbage for our arrival, grandmother Raya from Mokrets made dumplings with liver, and Nadezhda Ivanovna from Grebelki baked pies with apple and poppy seeds. Everything is very tasty. If someone needs recipes – write. Next time I will ask for you Galina Nikolaevna’s son came from the front. Just for a day, but even from this she cheered up and rejuvenated Grandfather Grisha fulfilled the order and cured his grandmother in a week. We met in a good mood and were touched for a long time, looking at the photo of Polina. In general, all the old people are waiting for her and Marusya to visit in the spring, they worry during the shelling of Kyiv as if they were relatives Nadezhda Ivanovna and aunt Olya also recovered. feel good Orthodox crosses are painted on every door in the houses. This priest went to the huts of old people at baptism We delivered another batch of products, took lists of necessary medicines for the next week in three villages, conveyed greetings from you to everyone Minus 340 days of war, which means we are 340 days closer to Victory Everything will be Ukraine!

We raised enough money to send 100 of these little AM/FM radios to Ukraine, plus one AM/FM/LW/SW set for the medical organization. I would like to thank everyone who donated generously to the cause.

We also sent along several large bottles of Ibuprofen, multi-vitamins and many packages of seeds for springtime vegetable gardens.

It is really important that we remember these people and what they are going through. When I see pictures and videos like this, it strengthens my resolve; we cannot let the sociopathic bullies win. 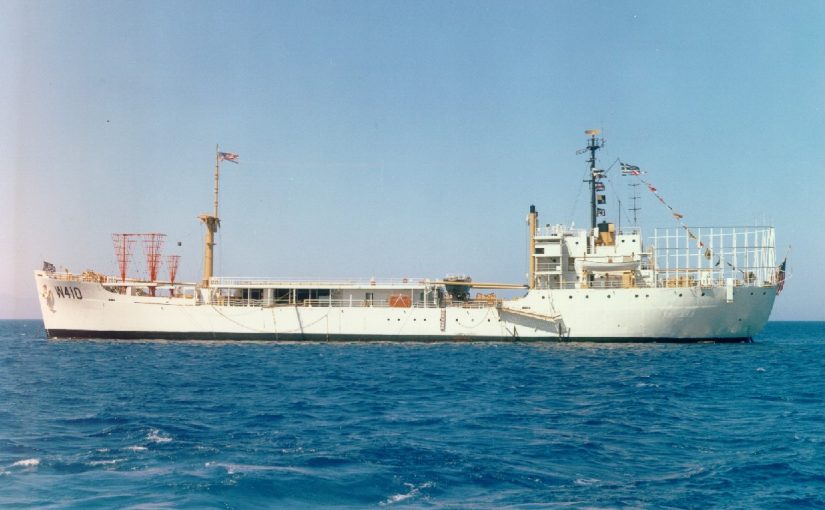 The VOA and shortwave broadcasting story is interesting from an engineering perspective. Over several decades, the US government spend many millions of dollars building out transmitter sites both overseas and in the continental US to transmit information behind the iron curtain. The Coast Guard Cutter Courier WAGR-410 was a converted cargo ship fitted out with an RCA 150 KW Medium Wave transmitter on 1259 kHz and two Collins 207B1 35KW shortwave transmitters in the cargo hold.

The ship had various wire aerials, including the Medium Wave antenna supported by a barrage balloon.

From September of 1952 until 1964, The Courier was anchored primarily off of Rhodes, Greece broadcasting programs into the Soviet satellite states in eastern Europe and the Soviet Union itself. This arrangement made it difficult to jam, although expensive to support and maintain.

It was, however, just one of the methods of broadcasting used.

Through the 1950s and 1960s, VOA, Radio Free Europe, and Radio Liberty built extensive sites in Bilbus Germany, RARET in Portugal, Tangiers, Tinang in the Philippines, Morocco, Udon Thailand, Greenville Site A and B in North Carolina, Dixon and Delano California, Bethany Ohio, etc. Many of these sites supported multiple curtain arrays, rhombic antennas used to receive programming, generators, living facilities, etc. In other words, no expense was spared.

In Rhodes, Greece; eventually the transmitting equipment from the CGC Courier was transferred ashore as a VOA relay site. The Courier then returned home.

The point of the story; a lot of time, effort, and money went into broadcasting information to the Soviet Union and its satellite states over the period of four decades. From what I am told (by people who lived through that time period), the payoff really occurred in 1986, when the Chernobyl nuclear power plant accident happened. State-run Soviet radio and television were broadcasting Swan Lake, while RFE/RL had useful information including where the worst of the radiation was spreading, the wind direction, and how to protect humans from radiological hazards. For many average Soviet citizens, this was the tipping point and the collapse of the Soviet Union was inevitable from that point forward.

After the fall of the Soviet Union, many of these sites were shut down and the facilities were torn down because the cold war was over. Shortwave broadcasting was seen as expensive and unnecessary. Unfortunately, many warning signs were missed along the way and the present occupant in the Kremlin has wild dreams of a New Russian Empire. To revive shortwave in the 2020s would require another monumental and sustained effort starting with getting good receivers into the right hands. Shortwave broadcasts could become an alternative information source, especially if the Russia-Ukraine war becomes a protracted draw. However, it is not simply a matter of turning a few transmitters on and scheduling some Russian language programming.

Could the Russian state propaganda machine be engaged and defeated; yes. Will it be quick and easy; no. Is it worth it; yes. The real problem is apathy. The Russians have been subjected to terrible governance since pretty much the beginning of their existence. How to overcome that apathy and the corresponding sense of helpless victimhood of the Russians themselves is the question.

Regarding Vagabond-Able, after the USCGC Courier returned to the US, it was used as a training ship until 1972, when it was decommissioned.

After having a nice Thanksgiving meal with my family, I was sitting around thinking about all the events in Ukraine. The situation over there is getting more desperate with each passing day. The wholesale destruction of the power grid is unfathomable to those of us sitting in our warm houses with full stomachs. It seems like these attacks will continue throughout the winter, which is charming.

With that in mind, I asked around with some people I know; would battery-powered radios help out? I was thinking about after any natural disaster here, most often battery radio is still the go-to source for information during a massive power outage. Where to get food and clean water, locations of warming centers, where to get medical treatment or just news in general. This is especially true if mobile data and internet service is affected. All of those things are currently happening in some areas of Ukraine. The short answer is; definitely YES! In fact, what was said was that for small villages and settlements, the need for small radios like this is urgent. Power restoration often happens first in large cities and settlements, while less settled areas can go for many days or perhaps weeks without power.

A little more research shows that the AM and FM bands in Ukraine are similar to ours with two exceptions; AM channels are spaced at 9 kHz and FM frequencies end in both odd and even numbers e.g. 96.0 MHz. Thus, radios need to be constant-tuning analog types. Other good features; small size and long battery life. Amazon has several models of radios in the 9-12 dollar range that run on two AA batteries. Something like this:

Along with a four or six-pack of AA batteries.

The next question is; how to get those radios from here to there? Knowing several people from that part of the world, I understand that care must be taken to ensure that the radios are not stolen in transit. I believe we have that sorted out. I have sent the first batch of 30 radios with batteries over. I should have confirmation of arrival in the next week or so. In the meantime, I have set up a GoFundMe campaign to send more portable radios over:

If you would like to participate, any donation would be welcome. All funds (less the Go Fund Me fees) will be used to send portable radios and batteries to people in Ukraine.

UPDATE: So far, we have received about $730.00 from the GoFundMe campaign. All of the donations are highly appreciated! I have sent another shipment of radios off and there is another one on order.

As time and funds allow, I plan on sending about 80 radios by early January. 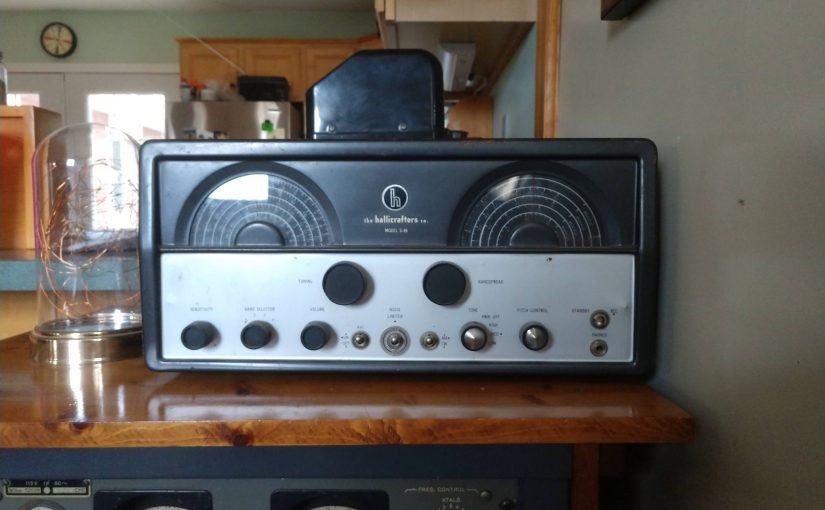 I came across an interesting article on the Engineering and Technology website:

How to defeat disinformation with short-wave radio

The takeaway is this:

“When you’re in an environment where infrastructure has been damaged, where transmission towers have been destroyed or where the power supply to the transmission equipment isn’t reliable and robust, such as some parts of Ukraine, then you end up with a fallback to older equipment, such as battery-powered radios,”

Griffiths, Sarah. “How to Defeat Disinformation with Short-Wave Radio.” RSS, The Institute of Engineering and Technology, 9 Nov. 2022, https://eandt.theiet.org/content/articles/2022/11/how-to-defeat-disinformation-with-short-wave-radio/.

That applies not only to war zones but also to natural disasters or other situations where widespread disruptions occur in communications or power distribution networks.

The article focuses mainly on the BBC’s efforts to get information to Ukrainians who may be listening on shortwave radios in occupation zones. That is an effective use of shortwave radio, to be sure. One problem with this idea; if there are no regularly used shortwave frequencies in the affected areas, who will have access to a shortwave radio? There may be a few receivers around in any given community, but the vast majority of people will not have access to them. The idea that a broadcast service can be neglected for years if not decades, then be quickly dusted off and put into use is simply not realistic. This applies to AM and FM radio as well.