Or “East wind rain,” which was the Japanese code words transmitted to their embassies indicated hostilities with the United States was imminent. While the Navy intercepted the first message to the embassies, outlining the various code words and instructions on what to do when or if they were used, they never actually intercepted the code word messages themselves.

This is not all that unusual, as the Japanese were using several different diplomatic, army and naval codes at the outbreak of the war.  Many different stations and frequencies were in use, and it is quite possible that the message was sent and never intercepted.  According to the NSA, many, but not all of the Japanese Codes had been cracked and were being read regularly.  The diplomatic code, known as Purple and well as a similar code, J-19 and a lesser version, JNA-20 were being intercepted and forwarded to Washington for decoding.  Only JN-25 was being intercepted and decoded at Pearl Harbor prior to December 7th.

In 1979 the NSA declassified over 2,000 intercepts.  They declassified more in 1994.  Those decrypts paint an interesting picture of the lead up and aftermath of Pearl Harbor.  A good book is “And I was There,” by Edwin Layton.  It was completed in the late 1980’s before the 1994 document dump.  Layton was indeed at Pearl Harbor on the morning of December 7th.  Layton does not come out and directly say that Washington knew of the attack, but rather that they should have known, warned Pearl Harbor but didn’t.

By the first week of December, the Japanese tipped their hand several times.

It is also well known the Roosevelt wanted Japan to attack the US as justification for the entry of the US into WWII.  In early 1941, Roosevelt sent a gun boat up from the Philippines nosing around the Chinese coast to see if it could stir up any trouble.  The Japanese failed to take the bait on that and several other occasions.

There is still quite a bit of controversy as to who knew what and when.  Whether information was deliberately withheld, or not transmitted due to some concern of compromised intelligence or some bumbling bureaucracy is hard to tell.  Certainly, the powers that be in Washington knew more than they let on.  The military commanders on Hawaii took the fall and several thousand lost their lives that morning.  Many more would die in the coming months and the Japanese tide rolled over the western Pacific basin.

By the end of World War II, over 74 million people had died, most of them civilians.  History, do not repeat thyself. 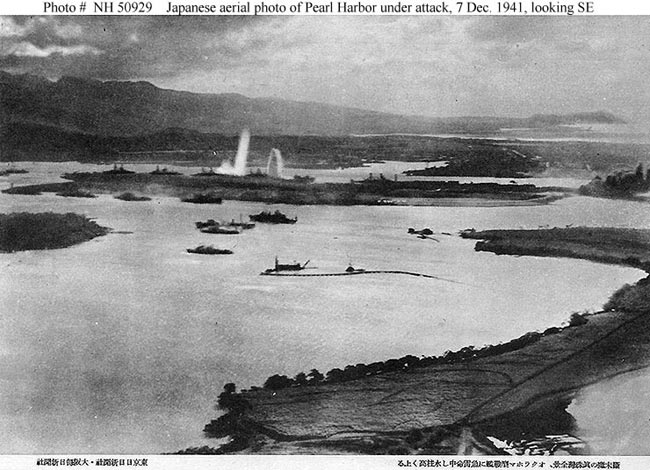 Yesterday, August 14th, was the 65th anniversary of the end of World War II.  Prior to the start of the US involvement in WWII, the Army and Navy had been intercepting and decrypting radio messages between Japanese military units, consulates, embassies and other overseas locations.

Back in the day, most everything was sent via Morse code over HF radio circuits.   It was the fastest way to send information from one point to the next.  These messages would be encrypted off line, either by hand or special typewriter.  The message text would then be altered into 5 number, seemingly random, groups.  On the other side, they would be decyphered using a key that matched the encyphering key.   There were several different cyphers systems being used, some for diplomatic traffic, several others for military, merchant marine, etc.

Since the messages were transmitted via radio, they were easy to intercept.  Everyone knew that the other side was listening.  The Japanese assumed that there codes were secure because a “caucasian mind could not possibly unravel the intricacies of a Japanese code.”  An assumption the Navy cryptanalysts had different ideas about.  Through the 1930’s and early 1940’s they had broke some of these codes, not all of them.

The Japanese diplomatic code was called “purple” by the US cryptanalyists.  It relied on a machine called system 97 (by the Japanese) which used telephone stepper relays to generate an ever changing stream of random code groups.  It was considered too secure to break.  William Friedman, a mathematician working for the Army, studied the purple messages and deduced that it was a machine generated code.  He then went to work on duplicating the machine and after a year or so came up with a perfect replica of the Japanese system 97 machine in early 1941.  From that point on, almost all of Japan’s diplomatic message traffic was being read by the Army, Navy and state department.  This work was top secret and carried out at the war department in Washington.  Information gleaned would be sanitized and transmitted to major commands as needed for tactical intelligence.

In early November 1941, the Japanese foreign office came up with the following code to be transmitted to the embassies in the event of the outbreak of war:

It is believed that on either December 4th or 5th, East wind rain message was received and decrypted.  This was testified to congress in 1945 by the head of the Navy COMMINT section, however, no record of the decrypted message exists.  Instead, there is a blank page and a missing message number (JD-7001) in the Japanese diplomatic intercepts file.

The fleet commander at Pearl Harbor knew none of this, as the information was kept under close wraps by the Navy department in Washington.  In early December 1941, most everyone figured that war with Japan would happen very soon.  Most of the Washington set believed it would start in the Philippines, then a US territory.  No figured that the Japanese would steam 3,900 miles undetected and launch a sneak attack on the US military base in Hawaii.  The attacking planes homed in on the signal from KGMB (after war reading of Cmd. Fuchida’s (IJN strike leader) diary indicates the actual station was KGMB on 590 KHz, and not KGU as their website claims), to help find Hawaii from carriers still 230 miles away.  The station had remained on the air overnight to assist a group of B-17 navigate from the west coast.  Unaware of the impending danger, the Hawaii military bases were enjoying a peaceful Sunday morning until 7:48 am, when the first bombs began to fall.

Of course, had the Japanese pressed the attack and launched a third wave to take out the fuel storage and repair facilities, indeed, history might be different.  The Pacific Fleet would have had to retire to California, leaving Hawaii exposed and quite possibly invaded.

Most people on the mainland first heard about the attack via radio.  At 2:22 pm eastern time, the AP issued a news bulletin and at 2:27 pm CBS broke into their Sunday afternoon programming to announce the attack.  Radio played an important part in WWII from start to finish.