Am I happy?  Oh yes I am. New transmitter = fewer midnight phone calls thus better quality of life for me and my family.  A solid state Nautel transmitter means fewer unscheduled trips to the transmitter site and better reliability.

As a result of consolidation and smaller engineering departments, almost my entire work day is now scheduled weeks in advance.  One little hiccup in the schedule can throw things off for days, resulting in many apologies, phone calls to reschedule, and general wasted time.

This is a V 7.5 FM transmitter, very likely the last V series transmitter Nautel ever makes.  They have moved on to the NV series.

It is replacing the Broadcast Electronics FM5A, which is 24 years old.  The BE has been a good transmitter, we lost a few rectifier stacks due to lightning over the years, but over all, it has been reliable and easy to repair when problems did arise.  This transmitter will be going into standby service.

The new transmitter, it sounds awesome.

Another example from my blown up shit collection, pictures archive:

The harmonic filter from a Broadcast Electronics FM-30T.  This actually started in the bullet connector to the 3 inch hardline on the output side of the filter.

Again, I did not install this myself, someone else did.  Cutting 3 inch hard line is pretty straight forward.  When using a field flange, the outer and inner conductors are cut flush.  Both conductors should be de-burred and filed smooth.  It only takes a little thing to start an arc with 30 KW of FM power, so once again, attention to detail is key to avoiding these things.

Fortunately, BE sent along replacement parts for the harmonic filter and the line section was replaced.

E.  Check all licenses and authorizations for accuracy, make sure all license renewal cards are posted and placed in the public inspection file.*

General maintenance that is completed on an as needed basis:

*These are FCC inspection items, pay close attention if you do not want a fine.

The .pdf version can be downloaded here. I’ll to an AM directional check list next week. 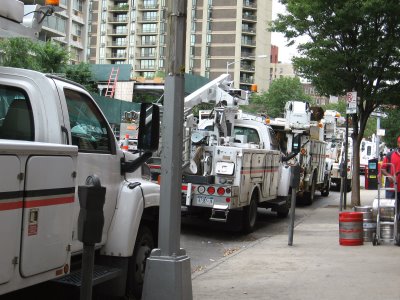