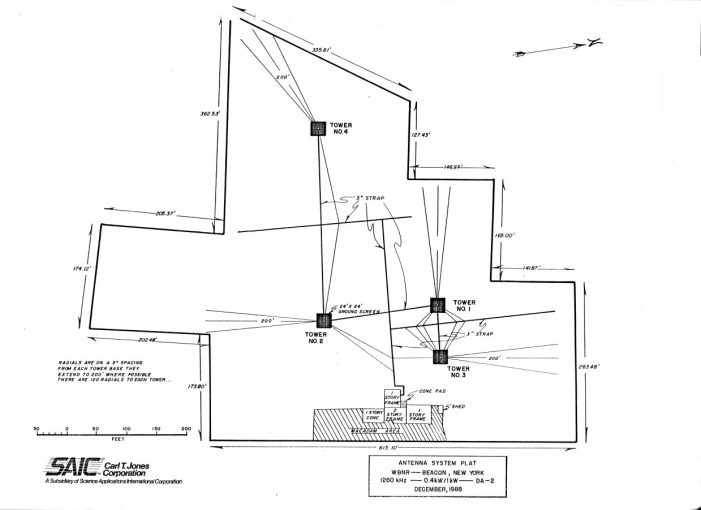 I have been working on an AM station lately.   WBNR signed on in 1959 and follows the now familiar AM trajectory; after making bank in the 60’s, 70’s and 80’s, revenue declined, maintenance deferred, yada, yada, yada…

After a stint with a news talk format, the station changed to “Real Country,” a few years ago.  WAT! Music on the AM? Actually, it is doing quite well. The perception is that AM sounds terrible and nobody listens to it.  The stock AM radio in my Subaru (made by Pioneer) sounds pretty good on AM.  I have noticed that when I first tune a station in, it sounds narrow banded, slightly better than a telephone.  However after a second or two, the bandwidth opens up and it can sound quite good.  I have also heard this station playing at several local businesses.  When we turn it off to do maintenance, the phone starts ringing.  Clearly, somebody is listening…

This station is part of a three station simulcast.  The AM station to the north got rid of its directional antenna and added an FM translator a few years ago.  That has made a big difference.  Thus a translator was acquired for this station as well.

The translator was held up by an informal objection filed by Prometheus, Et. Al.  as part of a blanket filing against all new translator licenses by the LPFM advocate.  In any case, the Construction Permit has been on hand for a while, so the owner felt it was time to move forward with building out the new FM signal.

Installing the single bay Shively 6812 antenna on the side of one of the night time towers triggered some other things.  A bit of the deferred maintenance was addressed;  new stockade fences around all the towers replaced the original fences put up in 1988. Those original fences were falling down.

While I was measuring the base impedance, I decided measure all the towers instead of just the night time tower that has the translator antenna mounted on it.  This is a good point of reference if any problems arise in the future.  Often, this information can be found in the technical paperwork from the original license application.  Those files can be a treasure trove of information.  Unfortunately, it appears that a good portion of the original paper work is missing.

The Phasor and ATU’s are a late 80’s Harris product.  They are actually in remarkable shape, all things considered.  All of the RF contactors are Harris HS-4P motor driven units.  They are rated at 30 Amps, RF-RMS.  I don’t think that they are supported by GatesAir.  I have a small stock of spare finger stock and contact bars.  I suppose, if I had to, I could make or adapt parts to repair.

The WBNR license application did contain an overall system diagram showing the Phasor and all the ATU’s.  It did not contain any component ID’s or other information.  I scanned that in, created a vector graphics file and expanded it to a 24 x 36 inch size.  I was able to fit all the component values and other information on the diagram.

The other issue is the monitor point descriptions.  They include statements such as “Point is marked with yellow and white paint on a tree,” or “In the northeast corner of the Texaco research facility parking lot.”  Those references are long gone and I would prefer to use a set of GPS coordinates.  Using the topographical maps from the proofs, I found each monitor point and then recorded a set of GPS coordinates for each.  In the future, they will be much easier to find.  If anyone is still doing monitor points, I would recommend this method.

Yet another problem; the phasor control system was damaged by lightning. The overly complicated Harris Phasor control card was replaced with something a little more straight forward and reliable.   I designed a simple set of relays, one for daytime and one for nighttime, to change the antenna system over.  The transmitter interlock goes through the relay contacts, so the transmitter PDM is killed while the power changes.  Tally back from each of the towers is handled by a set of relays for each pattern, which is also interlocked with the transmitter.  All of this prevents the RF contactors from switching hot, something that has caused some damage in the past.

Transmitter is a BW Broadcast TXT-600.  The power calculation is as follows:

ERP 100 Watts = 50 dBm
System gains and losses:
Transmission Line loss, 500 feet (152.4 Meters), RFS LCF78-50JA =  -1.75 dB
Isocoupler loss, Kintronic ISO-170-FM = -0.8 dB
Antenna gain, Shively 6812-1R = -3.39dB
Total system losses and gains: -5.94 dB
TPO: 55.94 dB or 393 Watts
With all that work completed, the license application was filed to cover the construction permit.  Once that was accepted by the FCC, program test authority was granted and the transmitter was turned on.  Hopefully, with the translator on the air, the perceptions regarding listeners will change and the station can bill more.
I really enjoy working on Medium Frequency antenna systems.  I don’t know why, but antenna systems in general are always fascinating to me.

8 thoughts on “More AM work”