After extensive testing of Both HD Radio and DRM, the Secretary of the Ministry of Communications Electronic Communications, Genildo Lins, said the tests of the two technologies have had poor results, especially high power FM . The testing demonstrated the digital signal coverage is approximately 70% of the current analog signal. “The future of radio is digital, but that future is not yet. We are unable to make a decision on these results.”  A polite way of saying “This is not the digital radio we were hoping for.”

These are just a few brief excerpts of the FM HD Radio test reports from Sao Paulo.  The method of testing:

The transmission system was located in the center of the city of São Paulo. The signal HD Radio digital broadcast was extended hybrid mode combined with the analog signal in the air, with separation of 163.8 kHz from the carrier’s analog FM signal and the carriers of HD Radio digital signal in sub-upper and lower sidebands. The power used in transmitter for the analog signal was 27 kW, and for the digital signal of 1 kW. Attaching the FM and HD Radio systems in their respective transmission antennas, the power Isotropic Effectively Irradiated (EIRP) of the analog signal was 112.3 kW and the digital signal of 1.12 kW. Thus, the protection ratio (EIRP power ratio between the analog and digital signals) was 20 dB (sic). During the measurement campaign, two commercial FM receivers were used analysis of analog reception, both to verify their potential impacts on receiving due the introduction of the digital signal, as to assist in verifying the coverage area of the signal analog.

The results of this testing:

Checking the results on each route, the route R1 radial (southeast direction), the stretch P1 to P2, that extends to 10.88 km (7.3 miles) of distance from the transmitter, the audio decoding was 71.6% of the digital audio frames received, and in the remaining sections of the route were little digital coverage.

Routes shown on a map: 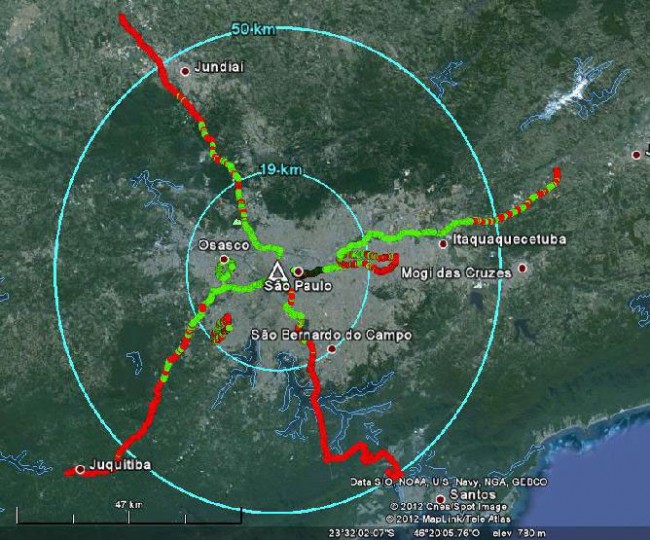 Using unbiased real world testing, HD Radio does not look so hot. One caveat; the digital carrier level is -20dBc. That being duly noted, results show a 112 KW EIRP analog station with a 1.12 KW digital carrier that is unusable 6 miles from the transmitter site in some areas.  It is almost hard to believe.  Original documents can be found on the Government of Brazil Ministry of Communications website (in Portuguese).  They are interesting reading, although you may need to parse them through the Google translator.

AM HD Radio (no surprise) and DRM have similar or worse results.

Thus the myth “Digital is better,” is called to question. I am not opposed to new technology, provided it works better than the technology it is replacing.

8 thoughts on “Brazil: The place where they test tech before it is implemented”