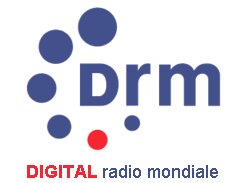 Could be.   Digital Radio Mondiale, or DRM, is a modulation scheme that a group of broadcasters and transmitter manufactures have been working on since about 1997 or so.  There are numerous shortwave broadcasters; the BBC, the CBC, Deutsche Welle, Radio France Internationale, the VOA, and others have been using DRM on shortwave for several years now.  I can state that the shortwave DRM system works well, I have a software decoder and use the sound card input on my computer to decode and listen to DRM shortwave broadcasts.

The goal of DRM is to establish a world wide open standard for digital broadcasting in the LF, MF, HF, and VHF bands.  In the early years of development,  DRM was designed for digital broadcasting on the bands below 30 MHz.  This system is now known as DRM30.  Since then, the DRM consortium has expanded that to the VHF band (up to 174 MHz)  as well (meaning where the current FM band is located) and have called that system DRM+.

DRM uses COFDM (Coded Orthogonal Frequency Division Multiplex) modulation, which is the same as IBOC HD radioTM.  This is a robust modulation system that employs multiple carriers at lower power (than an analog carrier) spread across the entire alloted bandwidth.

One of the claims is  DRM transmits less power and is more energy efficient.  In general, digital radio modulation does transmit less power, that is true.  However, transmitters have to be run more linear for digital due to the increased bandwidth.  This may not translate to greatly increased efficiency from the AC mains to RF standpoint.  Because of that, there is more waste heat, and thus more air conditioning is needed to cool the transmitter room.

Some of the advantages of DRM over Ibiquity’s HD radioTM are:

In addition to that, DRM30 station have the ability to transmit low frame rate H. 264 video.  This is a distinct advantage for short wave stations that are seeking a way around fire wall blocking.  The video image is small, 176 x 144 pixels, and it is 8 frames per second, which is about as good as can be expected using a 9 KHz channel.

In some cases, DRM is capable of a hybrid mode (ed note: DRM calls this “Simulcast mode”), but what have we learned about hybrid mode digital radio:  It doesn’t work very well. In short, it would be better if DRM were employed in the digital only mode.  To many, this is a distinct disadvantage, but I don’t see it that way.  There have been many that have made the IBOC roll out/FM broadcasting roll out annology.  Frankly, those arguments don’t hold water.  When FM was introduced, no attempt was made to shoe horn it into the existing AM (Standard Broadcast) band, it was not designed to interfere with other stations or itself, power levels were sufficient for good reception using existing technology, quality over AM was markedly improved and programming was often separate (simulcasting with existing AMs did not start until later).  My point here is that any digital broadcasting should be introduced on a separate set of frequencies.  Some have proposed using TV channels 5 and 6, which makes some good sense.  Whatever the outcome is, we have learned, the hard and expensive way, that hybrid digital broadcasting does not work well.

A brief video about DRM30.

Currently, DRM30 is only allowed on shortwave broadcast frequencies in the US.  I asked a product development engineer from a major reputable broadcast transmitter manufacture about this, his response was:

It might be fun to apply for an experimental license to broadcast somewhere in the 1600-1700 KHz range with DRM30 only and no analog modulation, except for an hourly station ID in morse.  A 1/4 wave tower in the middle of that band would be 141 feet tall.  With use of a skirt, a grounded tower can be employed.  That and a few above ground radials and the system would likely be pretty efficient.  Part of the experiment would include driving around and taking signal strength readings while recording the programming material.  This would give some real world testing on how the system would perform in wide spread use.

Of course, this would require a major about face by the FCC, which is not likely unless someone there grows or somehow acquires a back bone.

Some people question the need to do any type of digital broadcasting.  I am a realist, in one way, shape, or form, digital radio broadcasting will (or already is) take(ing) place.  It would make the most sense if the best system were used, which is not necessarily the first system proposed.  The big question is, will today’s terrestrial broadcasters be involved, or out of business.

28 thoughts on “Digital Radio Mondiale, an alternative to HD radio?”