The New York Times wrestles with a New Media business model.  I have been reading the NY times on line edition for years. I find their articles interesting and often more comprehensive than other media counterparts, even if I don’t necessarily agree with the point of view.  When I got my Android phone, I downloaded the NYT mobile application and enjoyed reading up on the latest news as time permitted.  It became part of my morning routine.

On March 28th, all of that will change. The NYT will put up a paywall, charging $15 to $35 per month for anyone going past a twenty article threshold. 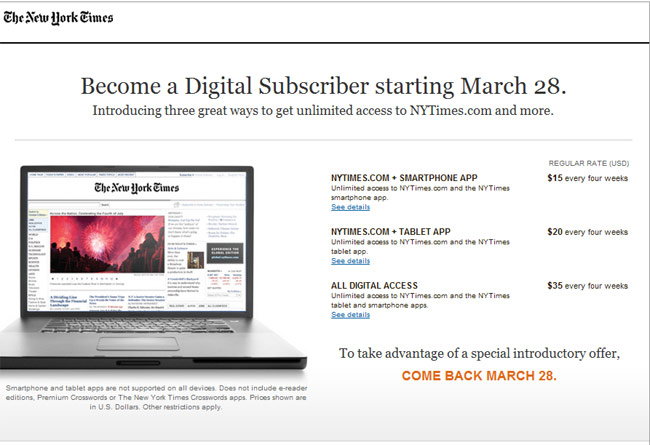 I have no plans to subscribe to any of these plans.  I will limit my NYT reading to the twenty articles per month and then get my news elsewhere.   This goes to show, once something is given away for free, it becomes very hard to charge for it later on.

This is a problem that new media types, myself included,  have yet to figure out; how to make money with it.  This blog is a good example; I work away, trying to come up with original material or expound on other’s work from an in the trenches point of view.   I have a core group of regular readers (thank you!) and quite a bit of search engine traffic just passing through.  Every once in a while, I get a good link in from slash/dot, boing boing, or dig, but those are rare.  Some small amounts of money are made here and there, but could I live off of this? No.  It is a labor of love more than anything else.  Something to keep my mind occupied while in between my children’s pickups and drop offs.  This is good because otherwise a fair amount of trouble could ensue.

While I empathize with the New York Times, those rates seem a bit exorbitant for an online distribution system.

This transmitter is about 10 years old. In ten years of service, there have been no failures.  Not one transistor has gone bad.  It is connected to a three tower directional array on 920 KHz.

Sadly, this model transmitter is no longer made.  They were built like tanks, heavy gage steel cabinets, well designed, well grounded circuit boards.

It is dirt simple; RF power MOSFETS on drawers, combined and tuned with the output network.  A power supply, exciter and simple control logic and nothing else.  No serial port to plug a computer into, no ethernet ports, no digital read outs, fancy efficiency optimizing computers, etc.  In the mean time, it does what it is supposed to do, stay on the air.

I was reading, with interest, the idea of “energy star” transmitters.  I think that good radio station engineers already take the electrical efficiency into account when buying a new transmitter.   That being said, electrical efficiency is not the only measure of efficiency an engineer should be considering.  Reliability, redundancy, and repairability must also be considered.  If the station spends an inordinate amount of time on the old back up transmitter while the new, super efficient main transmitter is off line is counter productive.  Not to mention the time wasted trouble shooting which could be better spent on something else.

What I have found out about computer networking is this: it is not rocket science.  In fact, most of it is pretty easy.  Physical networking and cabling is similar to audio and TELOC cabling.  Automation computer servers themselves are not difficult to understand as most of them run on some type of windows program.  Other servers such as Apache for WWW and for FTP and streaming run on some type of LINUX OS.  LINUX is also not difficult to understand so long as one knows the right command line prompts.

The first part of understanding computers is networking.  Without a computer network, a computer is a glorified typewriter.  Almost every automation system and or digital editor requires some type of network.  Consoles and computers that use AOIP require well constructed networks in order to operate properly.  To that end; cabling choices, network interface devices such as switches and routers, patch panels and so forth need to be specified and installed with care.

Most often, it is the simple things that will trip an installer up.  The one area where I have found the most mistakes made is the pairs connection to various termination points.  There are two basic standards, TIA/EIA T568A and T568B.  Neither is better than the other, both are often identified on terminating devices such as jacks and patch panels.  The most important aspect to these standards for an installer is to pick one and stick with it.

When certifying networks, the most common problem I have encountered is crossed pairs.  Almost invariably, one end will be punched down with the A standard and the other with the B standard.  Jacks are particularly difficult, as the color coding stickers show both.  Many patch panels have a slide out, reversible card with is an either/or situation.  For some reason, I have stuck with the B standard and on any project I am managing, I get rid of all the A color codes I can find and tell the installers that B is the only acceptable termination standard.  That cuts down on a lot of errors and redos during certification.  That is good, it saves time and I hate redos.

You can see that this color code marking can lead to confusion.  I take a sharpie and cross out all the the A markings to avoid installation mistakes.

Incidentally, on any new network installation, Category 6 cable should be used.  As more and more data through put is required for network applications,  Category 6 Cabling has better performance specs and will likely have a longer service life than other cable.   It may be a little bit more expensive than Cat 5,  however, well worth the investment.  It would be a great mistake and waste of money to have to pull out the network and reinstall it in a few years because the cabling doesn’t have the required bandwidth.

Category 7 cabling is in the works.

This is a Bauer FB-5000J transmitter, stashed away in the corner of a transmitter site.

Sorry I can’t get a better angle on it, as I said, it is stuck in the corner.

I don’t know what vintage it is, it seems to be from early 1960 or so as it has a low serial number.  It ran as the main transmitter until the Harris Gates BC5H was installed in 1976.  The transmitter is in beautiful shape, almost a museum piece.  I don’t know if it still has all it’s original iron, as the modulation transformer may have contained PCBs and been disposed of.  Otherwise, it is complete and tuned to 1,460 Khz.

I think the owner might be willing to donate it to a reputable organization, preferably a 501(c)(3).