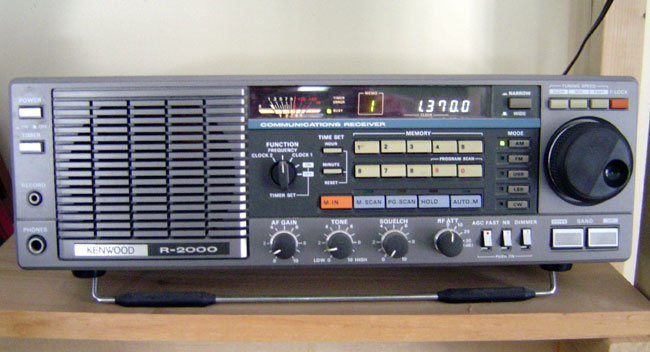 During the impending doom that is/was Hurricane/tropical storm Henri, I decided to bust out the old Kenwood R-2000. This venerable radio has been in my collection since 1989, when first purchased at the AFEES on Andersen AFB, Guam. Over many a year, it has given me lots of great service. However, last time I tried it a few years ago, the frequency tuning was all haywire and it seemed to be inoperative. I set it aside, as I always seem to have something important to work on. Not so much today.

As I discovered, there were two problems; first being a dead lithium battery and the second being the dirty pots on the VCO stepper, which are common failure modes for these units. I unsoldered the lithium battery and ordered a new one (CR 2032 with leads). The VCO stepper issue was corrected with a few slight turns of a small screw driver. There are a couple of Youtube videos on this procedure. Truth be told, the entire unit needs an alignment, which I will do once the replacement battery arrives. The service manual is available from several sources on line and it gives very good directions on how to perform an alignment.

Tuning around the Shortwave bands, I heard the normal things; some hams sending CW, some good some bad. A few messages from the Air Force Global HF network. On the broadcast side of things, Brother Stair seems to have multiplied… Then I came across an interesting signal on 9395 KHz. KMRT was broadcasting the K-Mart shopping sound track from the 70’s – 90’s, interspersed with spoof adds for “Plummet Mall.” As the story goes, these cassette tapes were saved from the rubbish bin by a store manager in 1992. Now, they are being broadcast for everyone’s enjoyment on the short waves. I can say, I felt like I was pushing that shopping cart down the very narrow isles looking for a pair of Adidas.

This is via WRMI, Okeechobee, Florida.

This was a lot of fun.

I will finish the alignment/repairs of the Kenwood R-2000 and put it back in service in the upstairs equipment rack. Enough of these software driven dongles, it is nice to just listen to the radio without having to boot up a computer.