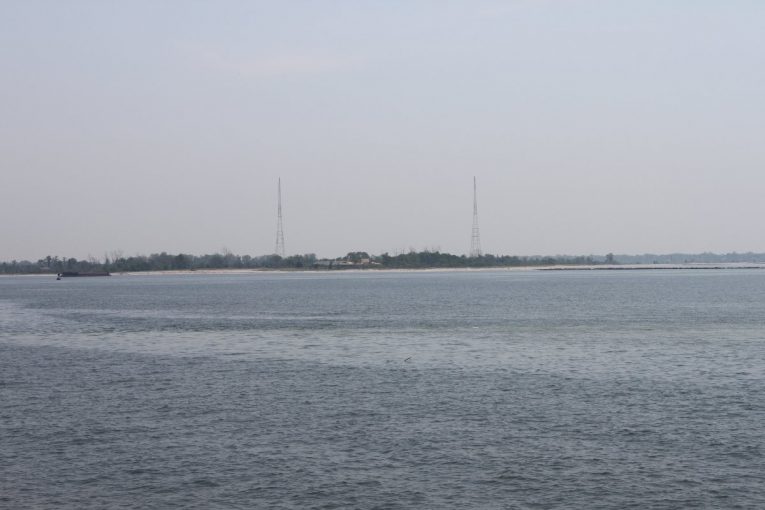 Yesterday I took, what I hope to be, my last walk across Pleasure Beach Island in Bridgeport, Connecticut. The task at hand was repairing the antenna array for WICC. There turned out to be several issues which were addressed in turn.

The trouble started when the feed line between the ATU and the tower became disconnected during a storm. That consists of a 1 inch copper pipe extending from the ATU feed through insulator up to a brass plate suspended between the four tower legs by hard drawn single 0 copper wire. The feed line separated at the brass plate which, unfortunately, is approximately eighteen feet in the air.

The feed line was repaired, but not effectively. By the looks of the picture, the brass plate never got hot enough to accept the solder.

After the feed line was re-repaired, other issues became apparent. The base impedance of the tower was still off and the array was still way out of tolerance.

Finally, we were back at the base of the tower with the defective feed point and a decided to grab the pipe and give it a good shake to see if it came apart again. It did not, but then I realized that that tower was supposed to be back in the circuit and I did not receive any RF burns for my carelessness.

We dug into the ATU and discovered that the input capacitor was marginal and there was a large crack in it. The output capacitor seemed to be completely open. The base current that we were seeing on the base current meter was being induced by the other tower. It all began to make sense.

The parts were ordered and shipped and I made another trip out to install them myself.

Thus, on this particular day, I had my tool bag, an OIB-3 with fresh batteries, my cordless drill, drill bits, and three type 294 mica capacitors. I took the drill because the new capacitors were quite a bit larger than the old ones, so I needed to move the stand off insulators to remount them.

The walk from the end of the dock to the transmitter site is approximately 900 meters or 0.55 miles, according to google maps. On a nice day, it is a pleasant walk. On not so nice days, it can be less so. It was foggy with light drizzle. Not enough to get wet right away, but enough to get slowly soaked while working on the ATU repairs.

With the new capacitors installed, I needed to adjust the array back into tolerance, which didn’t take too long. I made a short video of the station running at full power showing the antenna monitor readings for both the day and night patterns. Then packed up and headed back to the dock.

I wanted to take a set of monitor points, but the FIM-41 had been moved to another location. That was fine, I was getting pretty uncomfortable in my wet clothes, so I headed home.

4 thoughts on “Last Walk across The Island”