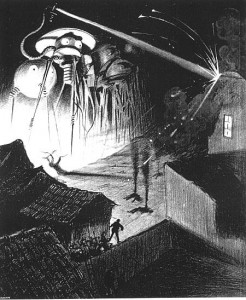 It was early evening when most people were sitting down to enjoy the latest edition of Mercury Theater on the Air on CBS.  After a brief narration by Orson Wells, which is set a year ahead of the actual date, there was a flash forward and brief weather forecast.  It then seemed that the show was not going to be on as Ramon Raquello and is orchestra were performing dance music when the music faded down and the announcer came on the air slightly out of breath:

Ladies and Gentlemen, we interrupt our program of dance music to bring you this special bulletin from the intercontinental radio news…

It was a great piece of theater, too realistic for many, others tuned in late and panic ensued.  People raced out of their houses, went to confession and didn’t pay for gas.  There were reports of long alien ships landing in New Jersey and incinerating crowds with heat rays. Then the black poison gas, oh, the black poison gas.

The day after, New York Times reported that up to 1.2 million people felt they were in grave danger and the world was ending.  It is hard to imagine how they came to that number, especially overnight for printing the next day.

Naturally, those commie federal regulators were having none of it, and the FCC proclaimed that broadcast hoaxes would not be tolerated, even promoligating a rule, 73.1217, stating, in part:

There are some radio stations that still broadcast this show every Halloween, with the appropriate disclaimers, of course.  For those that want to hear the War of the Worlds, go to Radio Heard Here.  It is really a great show.

Update:  Occasional reader Sandy sends along this link to the WKBW 1968 version, which was purported to be every bit as real as the 1938 version.  The station was deluged with phone calls.  In fact, legend has it that when the broadcast ended a little after midnight, show producer Jeff Kayne slipped his resignation letter under the General Manager’s door.