In previous years, I have had the very pleasurable experience of setting up a fire works show remote with music synchronized to our FM radio station.  Ordinarily I don’t go near a remote broadcast, however, this is one of the more intricate broadcasts requiring coordination between the studio, the remote site and the fire works barge anchored 300 yards off shore, out in the Hudson River.  The fireworks company, Garden State Fireworks, are consummate professionals and produce a very well choreographed show.

Giving them the synchronizing track on site is not very hard, however, I was surprised to hear that not every radio station does that.  In fact, one of our, ah, ehm, Clear Channel competitors from The big Metropolitan Center Nearby could not be bothered to do it for the 4th of July fireworks this summer and last summer too.

The synchronizing track is on the left channel of a CD that Garden State Fireworks created, it is 1200 baud FSK data, 8,N,1, so it is pretty robust.

I thought I would post on how I do it and why. First of all, for the how part, there are two options:

Option number 2 is technically far easier than option number 1, although it takes a fair bit of coordination.  Also, the sound reinforcement guy didn’t like the air signal idea because the quality of the audio.   That is a little nit picky, especially given the fact that much of the music at the fireworks show will be drowned out by the fireworks explosions.    In the end, he saw it my way.

Here is the block diagram: 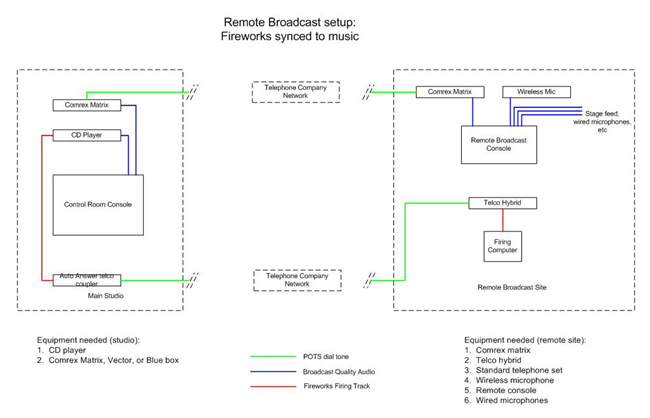 Note, this assumes no delay in the telco network, which under ordinary circumstances using wired, not cellular network, there should not be any.  The touchiest part of the whole thing is getting the stage coordinated with the studio during the transition to the remote broadcast.  Once that is done, everything else just falls into place.

The firing computer is located on shore next to our broadcast booth.  They send the signal out to the barge on a wireless LAN link.

That is the how part.  Here is the why (soundtrack is a little low):

That is from three years ago, but you get idea.

Even though I don’t work for these people anymore, I asked if they needed help with the broadcast this year.  “Nope, we got it, thanks.”  I will be paying close attention.