FCC rules stipulate that when a station is operating at a variance from its licensed parameters for more than 10 days, Special Temporary Authority (STA) is required.  The reasons for requesting an STA are varied but could include things like:

The loss of transmission tower at WUPE-FM falls into one of those broad categories.  Thus, we have filed a STA with the FCC for temporary transmission facilities while a new tower is being constructed.  Since the old tower is completely lost, we specified a new tower location, new height above average terrain (HAAT), new ERP and environmental certification.  To gather that information, several steps were needed:

I have taken the RF worksheet sections out of the 303s and separated them into the FM RF Worksheet and the AM RF Worksheet.  These worksheets are not effective for large tower farm type sites where there are too many variables and RF contributors to be accounted for.  The calculations on the worksheets are not conclusive, however, if the facility in question falls under the limits, it is generally accepted as being in compliance.   Taking ground measurements with a NARDA meter is the definitive method for determining RFR compliance.  Since this is a relatively simple site, the worksheet calculations should be sufficient.

The worksheet calculations show that the RFR is with in both the controlled occupations limits and the uncontrolled general population limits.

The position of the new temporary pole verified on itouchmap.com: 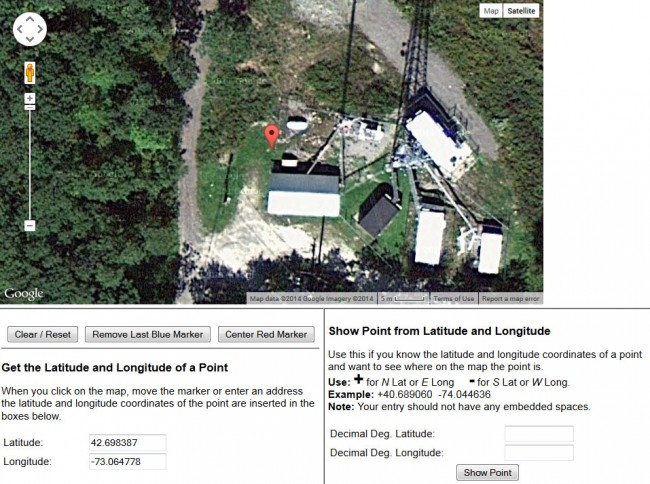 It is never good to be operating at a varience from licensed parameters without notification of the FCC. Such things could lead to fine or other problems for the broadcaster.

I have been reading the comments regarding the FCC’s NPRM (13-249).  Clearly, many people are interested in keeping the AM broadcasting band both active and relevant.  Some of these suggestions have merit, but are unlikely to be adopted by the FCC.  Others are viable and could alleviate at least a few of the technical shortcomings of the AM band.  The rest fall along expected positions.  Here is a brief rundown:

Talking amongst engineers and AM broadcasters, many of these ideas have merit.  The real question is, will any of this bring more listeners?

In the putsch to revitalize AM, FCC Commissioner Ajit Pai advises that it would be best if we did not argue about solutions.  Actually what was said was this:

On the other hand, if too many broadcasters allow the perfect to become the enemy of the good, our efforts could be doomed by infighting.

That is well and good, so long as the proposed solution does not make things worse.  I would posit that worse is already the enemy of the good, so any proposal that would make things worse should be protested vigorously.

I have written quite a bit about AM, its relevance and possible revitalization.  There is no one sized fits all solution to the problems facing AM broadcasters.  In the final equation, stations should be judged on their viability as a business and service to the community.  Those that fail to measure up should turn in their licenses.

Update: And so it begins. The narrative is already being shaped, as Darryl Parks (original post has been removed) has found out.  After posting in his blog a few comments on the FCC’s revitalization efforts, he was excoriated by several high profile broadcasters calling his comments “Beyond not helpful.”  For those not versed in double speak, that means it is harmful.  While Parks may not have gotten all the technical jargon exactly right, his points are valid and are in agreement with the widely accepted laws of physics.  I know, I know, quoting science is dull and boring, something that conspiracy theorists are well practiced with.

Now, SHUT UP AND GET BACK IN LINE

I am wondering what is going on with the HD Radio roll out these days. Particularly the all digital AM conversion scheme being bantered about so often last spring. Not much is being discussed publicly about that or the AM revitalization.  I have found FCC Commissioner Clyburn’s remarks at this week’s NAB Confab interesting.  HD Radio is paid lip service here:

But in the solutions for AM broadcasters, HD Radio is not mentioned at all.  What is put forward as a six (actually five) step plan to revitalize AM radio turns out to be some rearranging of the deck chairs and little more. Cliff notes version for the FCC’s AM revitalization:

While those options may save an AM license holder some money, none of them do anything to improve the technical quality of AM broadcasting.  Several of them (#2, 4 and 5) will, in fact if widely implemented, reduce signal levels over cities of license, making electrical noise and interference problems more prevalent. This is a step in the wrong direction.

These points are basically a rehash of some to the MMTC’s (Minority Media Telecommunication Council) ideas for a radio rescue first bantered about in 2009.

This demonstrates that the NAB and the FCC are not at all serious about revitalizing the AM band but merely marking time and making it look good until the final transmitter is switched off.

AM licensees are on their own, but all is not lost.  I have noticed several successful stand alone AM station that are not only surviving but thriving.  The common thread in these station is good local programming.  On the technical side of things; a well maintained plant with good quality audio feeding a properly operating transmitter and antenna array will go a long way to providing good service to the city of license.