So here you are, minding your own business on a not so frantic Wednesday afternoon, when a guy shows up in the lobby and wants to see you.  The receptionist says he has a badge and he is from the FCC.

Actually, things are not so bad as they might seem, after all, this is not your father’s FCC.

Many stations use the state broadcaster associations Alternative Inspection Programs (AIP).  This is where you pay a contractor from the broadcaster’s association to come out and do a mock inspection of your radio stations.  After the station “passes” the “inspection” it is issued a “certificate” that “insures” it won’t be inspected by the FCC for three years.

Totally bogus, or as the French might say, complete bull shit.

The stations I currently work for had those “certificates.”  When the FCC inspector showed up, he laughed at them and inspected us anyway.  We complained to the state broadcasters association and the head of the FCC enforcement bureau at the local field office, all to no avail.   This happened four times.  Each time the FCC inspectors found nothing and went on their way.

What did I learn from this?  Why bother with the stupid AIP’s when all that needs to be done is comply with the FCC’s rules.  After all, the so called “inspector” from the broadcaster’s association is merely going to use the same FCC check list that is down loadable from the FCC web site.  Anyone can do that themselves.

I also learned that the FCC inspectors check a few things more closely than others.  For example:

So prepare ahead of time for the inevitable visit.  It is very easy to comply with the FCC rules using the FCC checklists.  Both the AM station checklist and the FM station checklist can be down loaded and used to self inspect any radio station.

Here is something else that I have found.  Clean up the transmitter site.  Sweep the floor, replace the burned out lights, empty the garbage, keep a neat maintenance log, etc.  These things go a long way to making a good first impression, which can make the inspection go a lot better.

Once, myself and the FCC inspector pulled up in front of the transmitter building of an AM station.  The grass in front was mowed, the bushes were all trimmed back, the field was mowed, the towers had new paint on them, The fences were in good shape, the place just looked good.  We were about to go inside when he asked “Does the inside of that place look as good as the outside?”  Which it did and I said yes.  Then he said he had seen enough, have a nice day.

So, when the FCC guy shows up, offer him a cup of coffee and relax, things are going to be alright.

Update: This is the actual check list that an FCC inspector will use if he is inspecting a broadcast station. 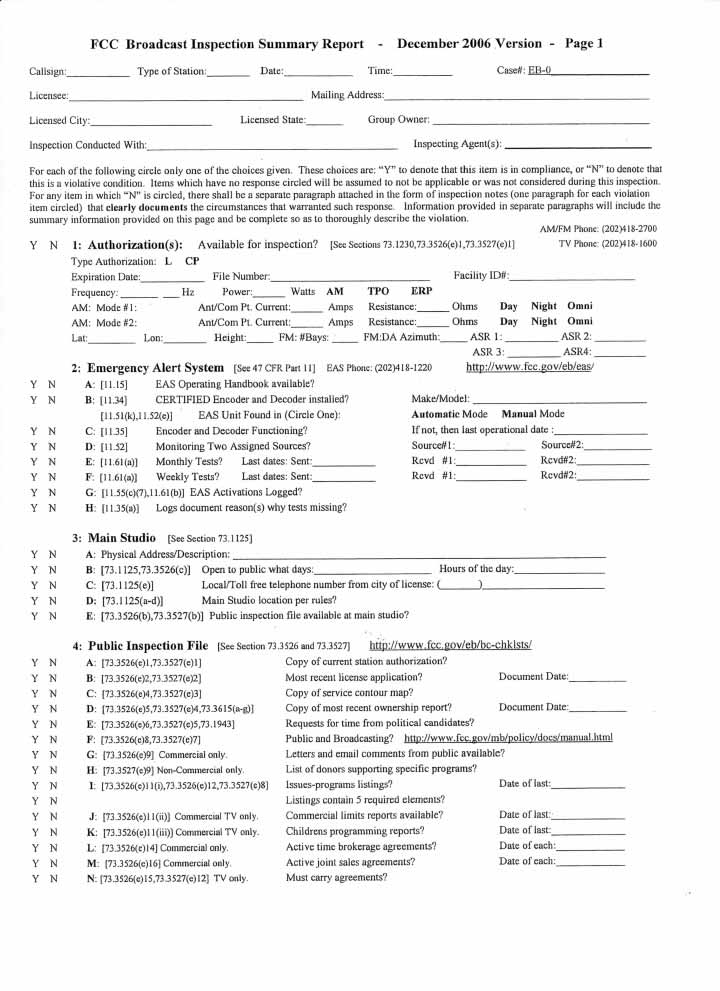 Because of this post, I have received some e-mail asking why I am against community radio.  I am not.  In fact, I support community radio.  I think that community radio done well is a wonderful tool in our democracy, giving a voice to those that are watching government.  It also promotes other locals interests, events, music, etc.    I would like to see more failing stations bought by community broadcasters and turned into something that is a public trust and responsive to the local population.

What I was trying to get at in the previous post was that over crowding the FM band with more and more small signals will degrade it.  There is no ifs, ands or buts, removing third adjacent protections on the FM band will increase the noise floor.  This will lead to more interference on the average FM radio, which will lead to more people getting fed up and tuning out.

Here is why:  You cannot change the laws of physics.  FM transmitters have output filters that attenuate side band energy, that is to say, energy transmitted on 1st, 2nd and 3rd adjacent channels.  A 50,000 watt FM station on 100.3 MHz will have side band energy on 100.1, 99.9 and 99.7 MHz as well as 100.5, 100.7 and 100.9 MHz.  Due to the limitations on the components used to construct those filters, they can only be designed with the accuracy of the components used.  In other words, most electrical components have a tolerance given in percent, example +/- 10%.  That means that the value of the component will change, usually because of heating.  Therefore, output filters cannot be constructed to limit emissions to only the main channel and say one adjacent channel, they would drift off frequency.

Also, creating a brick wall filter that cuts everything off at the second adjacent channel will cause distortion of the RF signal on the main channel.  With analog AM and FM transmitters it cannot be done.  Digital transmissions are another story, but that is not what we are talking about here.

That is an engineer’s point of view.

One other thing about adding hundreds more LP FM signals.  There should be something that stipulates most (say >50%) of the programming be locally originated.  Recorded for later playback is fine.  Having thousands of LP stations broadcasting the same syndicated shows or running voice tracked automation 24/7 would be a recreation of the AM band as it currently exists.  If you want to listen to that, then it already exists, help your self.  I, on the other hand, would like to avoid the AMization of the FM band.

I sent off a letter to my Senators and Congressman this morning regarding HR 1147/S 592 AKA Local Community Radio Act.  Basically I am against this.  Not that I don’t appreciate what it is trying to accomplish.  I believe the technical degradation of the FM band is a higher concern.  After all, if we turn the FM band into what the AM band has become, nobody will listen to radio.

Radio is too important to ruin.  Here is what I wrote:

I strongly urge you NOT to support the bipartisan Local Community Radio Act (HR 1147/ S. 592) sponsored by Reps. Mike Doyle and Lee Terry and Sens. Maria Cantwell and John McCain.

In spite of what many have said, Low Power FM (LPFM) contributes to the technical degradation of the FM service.  By adding more and more signals covering every possible spot in the FM spectrum, the noise floor is raised causing many FM receivers to “picket fence” which is annoying to most listeners.

Radio has suffered enough degradation over the last few decades.  AM radio is now so fraught with interference, especially at night, most people do not even consider listening to it.  Packing the FM dial with thousands of low power operators will create the same problems and cause most people to abandon radio altogether.

I am a strong proponent of 1st amendment rights.  I believe the sponsors of this bill are well intentioned, however misinformed. I believe that the deregulation of commercial radio allowing one company to own 1,200 radio licenses has created most of the problems we see today.

Clear Channel, in particular, has removed almost all localism from radio, creating bland canned music channels.  Their modus operandi was to buy a group of radio stations in a market, combine the stations under one roof, get rid of most of the staff, and drop the advertising rates so other local stations could not compete.  Non-Clear Channel stations were then forced to make cuts in there advertising rates and or expenses to stay in business.

The answer is not to create a bigger mess.  Instead:

1.  Push the FCC to tighten ownership rules.  In some ways the horse is already out of the barn, but it would prevent another Clear Channel from forming in the future.
2.  If major radio groups go bankrupt and are broken up, allow it to happen, do not intervene.  This will allow real radio broadcasters to pick up the pieces and put something together.  Perhaps investigate supporting small radio owners by waiving FCC fees and limited tax breaks for a period of time.
3.  Push the FCC to continue with the localism hearings they were conducting.
4.  Push the FCC to update the EAS and make a workable Emergency Alert System in the US.

Radio is too important a resource to have it ruined.  Of all the media outlets, radio is the most robust.  During an emergency often times the utility grid is down.  Many radio stations have backup power generators and can provide vital information when the internet, phone system, cable TV network, cellphone system, e-mail, etc are down.

Radio can provide local government important mass access to their constituents during elections and at other important times.  Radio is free, there are no subscription fees, no service providers, etc.  Almost everyone owns a radio, most people own several.

Small savvy radio owners can make a go of it, provided the deck is not stacked against them.

Please DO NOT support the Local Community Radio Act. Thank you.

If you want to get involved, you can go the the Free Press website, there you will find a link to a “Take Action” page (not sure that link will work).  Again, I am not opposed to Free Press, or even Free Radio.  Packing the FM spectrum with LPFM, translators and the like will only create reception problems.  This is just become another reason for people not to listen to radio.

Back in the mid-90’s the FCC had a chance to redo the EBS and produce something that was a streamlined and effective tool for public warning.  Unfortunately, the EAS system is neither.  Rather, it is a cumbersome system of weekly and monthly tests scheduled around pre-conceived notions that how the system is tested every week will be how the system works in an emergency.  In practice, this is generally a good theory of system design, but it has failed miserably with EAS.  The reasons why are thus:

The system as is is not reliable and sooner or later that will be shown with a large scale failure.  Recently, the FCC held a summit with the Department of Homeland Security.  The cliff notes version of this event is: Yes, the system can be made better.  Let’s keep throwing the same ideas at the wall and see if anything sticks this time.  Excuse me if I don’t do back flips, this is the same information that was discussed during the last “lets revamp EAS” discussion back in 2005 (04-296).

In the mean time, the EAS continues to be a good fund raiser for the FCC enforcement bureau.  Which, you know, it is easier to go to a licensed radio station and bust them for not re-transmitting the RMT (Required Monthly Test) than it is to go out and bust some of the numerous pirate radio operators, some of whom are operating in the same city/metropolitan area as a field office.

The shame of it is, it could work without a great deal of cost, very well.