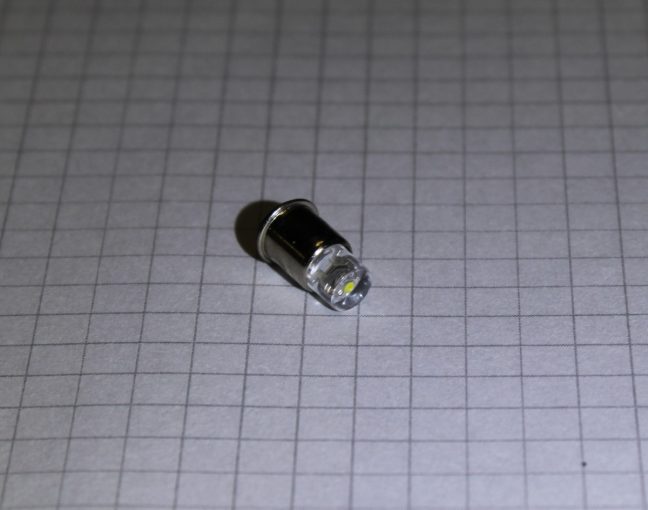 What is wrong with this picture?

It is a little bit blurry, but the real problem is that none of the indicator lamps on the phasor or antenna monitor are working.  Those little incandescent 387 bulbs burn out frequently.  It is difficult to tell, at a glance, whether the phasor is in daytime or night time mode.  One also cannot tell which tower or mode is selected on the antenna monitor.

It is a small job to replace them, but it does take some time.  They currently exist in older transmitters, studio consoles, meter back lighting, and other control indicators.  Since I began working in radio, I have replaced hundreds of these little lamps.  I would rather spend my time on more interesting projects.

The 387 bulbs cost about a dollar each and last less than a year, in most cases.  Fortunately, there is a solution to all this.  Enter the based LED replacement lamp.  These little guys have the long life of an LED (100,000+ hours) in a package that is a direct replacement for the Incandescent lamp.  They run about $5.31 each.

Those Dialight LED lamps are available from Mouser, Allied and Newark Electronics.

Time is money.  There are much better things to be doing than going around replacing incandescent indicator bulbs in various pieces of equipment.  At the same time, it is important to know what the status of that equipment is at a glance, which is the reason for using any type of indicator in the first place.  Using drop in replacement LED indicating lamps with certainly save time and money in the long run.

WXHC in Homer, New York will never be listed on the NY Stock Exchange. Is that bad?

They don’t think so. A small class A FM station, one of many that signed on in the early 1990’s as part of the 80-90 drop ins (FCC docket 80-90, for those unfamiliar). Many of these stations did not fair too well and ended up being absorbed by larger stations and groups starting with the first wave of ownership deregulation in 1993.

WHXC has remained under the same ownership since it signed on in 1991. Eves Broadcasting is a family operation, employing maybe half a dozen people. Their studios and offices are on the third floor of the Bank of Niagara right in the center of town.  The facility is very nice.  Like any successful radio station, their focus is the community they serve. The format is “Oldies” but they also broadcast high school football, Syracuse sports and so on. They host a yearly Blue Grass festival on the village green.

The air studio has an Arrakis console and uses BSI Simian automation software. They have live DJ’s from 6am to 6pm, local news, weather, sports, etc.

The production room has a BE Spotmaster 8S200A console from 1978. Aside from needing some power supply capacitors, it still works relatively well.  However, as the owner’s son said; that thing belongs in a museum.

BE Spotmaster line input card. Probably can still get all these parts if we wanted to.

I forgot to take pictures of the transmitter site when I was there.  Next time.

We will be working on several projects for these folks, so I will keep  you posted on the progress.

On the subject of project management; often times, we need to keep track of the small details that can derail a project, blow the budget and upset schedules. A quick check list can help to identify things that might not have been planned for. I developed a checklist mentality in the military. There, we had checklists for everything. Simple day to day things like disposing of garbage over the side, or pumping the CHT (sewage) tank to complex evolutions like entering or leaving port all had a checklist.  On the aforementioned CHT tank; the Coast Guard cutter I was on had a vacuum flush system to conserve water.  Emptying the CHT tank involved a complex set of valve openings and closings to rout compressed air into the vacuum tank and literally blow the sewage overboard.  Anyone can see the danger in such a design.  Failure to follow the exact procedure resulted in raw sewage blowing out of the nearest toilets, which were unfortunately (or perhaps humorously) in the lower level officer’s staterooms.

I have made a series of outlines for different project types.  These can be used as general guidelines for project planning and management.  Of course, each project is different, but these are flexible enough that they can be adapted on a project by project basis.

These are for general use, and should be adapted for your own purposes.  Don’t forget to document and label all the wire runs, etc.

This happened recently at an AM station we were doing work for. It seems the modulation monitor was not working when connected to the backup transmitter. A quick check of the RG-58 coax showed that I had the correct cable plugged into the monitor selector relay.  Another check with an ohm meter showed the cable was okay.  Then I looked at the connector on the monitor port of the transmitter and saw this:

Looks like the pin is too far back in the connector. This is an old style BNC connector with a solder in center pin:

The center pin has a blob of solder on it, preventing it from seating properly in the connector body. I could have lopped it off and applied a new crimp on connector, but my crimp tool was in the car. I didn’t feel like walking all the way through the studio building, out into the parking lot and getting it. Therefore, I used a file and filed off the solder blob then reassembled the connector:

The transmitter was installed in 1986, I think the connector had been like that for a long time.

I like my cool network analyzer and all that, but sometimes it is the Mark 1, Mod 0 eyeball that gets the job done.