Installing transmitters requires a multitude of skills; understanding the electrical code, basic wiring, RF theory and even aesthetics play some part in a good installation.  Working with rigid transmission line is a bit like working with plumbing (and is often called that). Rigid transmission line is often used within the transmitter plant to connect to a four port coax switch, test load, backup transmitter and so on.  Sometimes it is used outside to go up the tower to the antenna, however, such use has been mostly supplanted by Heliax type flexible coax.

We completed  a moderate upgrade to a station in Albany; installing a coax switch, test load and backup transmitter.  I thought it would be interesting to document the rigid line work required to complete this installation.  The TPO at this installation is about 5.5 KW including the HD carriers.  The backup transmitter is a Nautel VS-1, analog only.

Working with rigid line requires a little bit of patience, careful measurements and some special tools.  Since the line itself is expensive and the transmission line lengthener has yet to be invented, I tend to use the “measure twice and cut once” methodology.   For cutting, I have this nice portable band saw and table.  This particular tool has saved me hours if not days of work at various sites.  I have used it to cut not just coaxial line and cables, but unistrut, threaded rod, copper pipe, coolant line, conduit, wire trays, etc.  If you are doing any type of metal work that involves cutting, this tool is highly recommended.

Next point is how long to cut the line pieces and still accommodate field flanges and inter-bay line anchors (AKA bullets)?  The inner conductor is always going to be sorter than the outer conductor by some amount.   Below is a chart with the dimensions of various types of rigid coaxial cables. 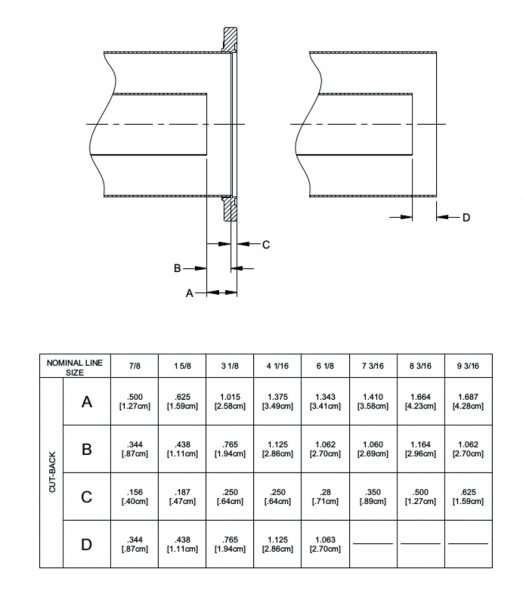 The next step is de-burring.  This is really critical at high power levels.  I use a copper de-burring tool commonly used by plumbers and electricians.  One could also use a round or rat tail file to de-bur.  The grace of clamp on field flanges is they have some small amount of play in how far onto the rigid line they are clamped.  This can be used to offset any small measurement errors and make the installation look good.

Most ordinary field engineers will not need to design an ATU in the course of their normal duties. However, knowing the theory behind it can be very helpful when trouble shooting problems.  Also, fewer and fewer people understand RF these days, especially when it comes to AM.  Knowing a little bit can be an advantage.

We were working on an AM tower recently when several discrepancies were noted in the ATU:

This was connected to a 202° tower. There were several complaints about seasonal shifts and narrow bandwidth. The VSWR meter would deflect slightly on high frequency audio peaks, always a bad sign.  A little bit of back story is in order.  WFAS signed on in 1930 using a four legged self supporting tower.  This tower was used until about 1986, when it was replaced with a series excited, guyed tower.  The ATU in use was initially designed for the replacement tower, which was likely had a good bit of capacitive reactance.  I am speculating on that, as I cannot find the original paper work for the replacement tower project.  At some point, somebody decided to ground the tower and put a skirt on it, likely to facilitate tower leasing.  The skirt was installed, but the ATU was never properly reconfigured for the high inductive reactance from the skirted tower.  The truth is, the Collins 820-D2 or Gates BC-1G tube type transmitters probably didn’t care.  They were probably like; bad load, meh, WHATEVER!  Although the audio quality likely suffered.  That all changed when the Broadcast Electronics AM1A was installed.  To fix the bad load problem, a BE 1 KW tuning unit was installed next to the transmitter.

We reconnected the shunt leg and moved the capacitor inside the ATU and on the correct side of the base current meter.   After several hours of tuning and fooling around with it, the ATU is still narrow banded, although now at least the input is 50Ω j0. I believe the current design has too much series inductance to be effective.

Thus, a redesign is needed.  I think, because of the inductive reactance of a skirted tower, a phase advance T network will lead to best bandwidth performance.  The basic design for a +90 degree phase advance looks like this:

To calculate the component values for the ATU, some basic arithmetic is required.  The impedance value for each leg in a +/- 90 degree T network can be calculated with the following formula:

For the output leg, we must also consider the inductive reactance from the tower which needs to be cancelled out with capacitance.  Thus, the output capacitor needs to have a value of 53.85Ω + 580Ω = 633.85Ω

The amazing thing is, all of these components are available in the current ATU, they just needed to be rearranged.  The exception is the vacuum variable capacitor, which I salvaged from an MW-5 transmitter many years ago.  I donated that to the project, as I am tired of looking at it in my basement.  The reason for the vacuum variable capacitor will become evident in a moment.  The input capacitor will be slightly over value, which will require the inductor to tune out the excess capacitance.  A good design rule is to use minimum inductance to adjust the value of a fixed capacitor, thus the capacitor should be not more than 130% of the required value.

Final consideration is the current and voltage ratings of the component.  As this is a re-build using existing components, chances are that they already meet the requirements.  On a new build or for replacing parts, one must consider the carrier power and modulation as well as any asymmetrical component to the modulation index.  For current and voltage each, the value is multiplied by 1.25 and then added to itself.  For a 1,000 watt carrier the input voltage on a 50 ohm line will be approximately 525 volts at 10 amps with 125% modulation.  A good design calls for a safety factor of two, thus the minimum rating for component in this ATU should be 1050 volts at 20 amps, rounded up to the next standard rating.   The capacitor on the output leg should be extra beefy to handle any lightning related surges.

The current rating for a capacitor is usually specified at 1 MHz.  To convert to the carrier frequency, the rating needs to be adjusted using the following equation:

The vacuum variable output capacitor is rated for 15,000 volts, 42 amps.  Adjusted for frequency, that changes to 46 amps.  The calculated base current is 4.18 amps carrier, 9.41 amps peak modulation.  Thus, the capacitor on hand is more than adequate for the application.

I have been fooling around with Smith Charts lately. They look complicated, but are really pretty easy to understand and use, once you get around all those lines and numbers and stuff. Smith charts offer a great way to visualize what is going on with a particular antenna or transmission line. They can be very useful for AM antenna broadbanding.

More on basic Smitch chart usage information on this video:

I touched on the black art of AM antenna broadbanding before. It is a complex topic, especially where directional antenna systems are concerned, as there are several potential bottle necks in a directional array. To explain this simply, I will use an example of a single tower non-directional antenna.

The base impedance is not too far out of line from what is expected for a tower this tall.  Plotted on a Smith Chart:

One of the first principles behind broadbanding an AM antenna is to distribute the sideband energy evenly and have symmetrical VSWR.  The antenna tuning unit will match the line impedance to the load impedance and cancel out the reactance.  Having the proper phase advance or phase retard rotation will distribute the sideband energy symmetrically about the carrier.   To determine phase rotation, the cusp of the plotted graph is rotated to face either the 3 o’clock or 9 o’clock position (0° or 180°).  The cusp is where the direction of the line changes, which in this case is the carrier frequency, 1430 KHz.  The above example, the line is fairly shallow, which is typical of a skirted tower.  Thus, the best phase rotation to start with is +79°.  This will likely be close, but will need to be tweaked a bit to find the optimum bandwidth.  After looking at the plotted Smith chart, my first inclination would be to reduce the rotation, more tower +75° as a first step in tweaking.

When working with AM systems, the bandwidth of the entire system needs to be examined.  That means that final bandwidth observations will need to be made at the transmitter output terminal or in some cases, the input to the matching network.  It varies on system design, but things like switches, contactors, mating connectors, ATU enclosures, etc can also add VSWR and asymmetry.  Broadbanding even a simple one tower AM antenna can require quite a bit of time and some trial and error.

I will touch on ATU design in the next post.

This is a Webinar video from Nautel about their Radio Coverage Tool:

This can be a useful tool for those looking to gauge realistic coverage of a station in terrain challenged areas.  It can also be useful for studying STL paths, RPU coverage, etc.

One problem is the power levels and antennas are preset, with the minimum setting 200 watts into a two bay antenna.  These settings are too high for use when investigating a potential LPFM.  For that, the Radio Mobile Online (which is the engine behind the Nautel RF tool kit) can be accessed directly via www.ve2dbe.com/rmonline.html.  Requires an account, which is very easy to set up.  For most users, FM broadcast band frequencies will not be available, however 2 meter amateur frequencies (146 MHz) are the default, and for all practical purposes, will model coverage in the FM band (88 to 108 MHz) just fine.

Looking at a coverage terrain map, the picture changes somewhat:

This is based on predicted receiver location using terrain data; receiver antenna height 1 meter, 90% reliability, minimum signal level 10 µV (20 dBu,  yellow, very good car radios) and 31.62 µV (30 dBu, green, good radios and indoor reception).  Areas to the south and east of the transmitter are shaded by a large hill, thus they show low or no signal on the terrain based coverage map.  UN Population data indicates the yellow has 178,573 and the green area has 72,014 persons.  This map does not take into account co-channel and adjacent channel interference, which there is sure to be.

When comparing the two maps, one can see the coverage holes in the terrain map that are within the 60 dBu contour.  There may also be a slight difference in populations covered because the FCC map uses 2010 US Census data and the Radio Mobile Map uses UN population data.  For general planning purposes, the area shaded in green would be a safe bet on good reception, all other things being equal.

Since the LPFM stations are very limited in their ERP, finding a good transmitter site which will cover the desired area will be key to a successful operation.