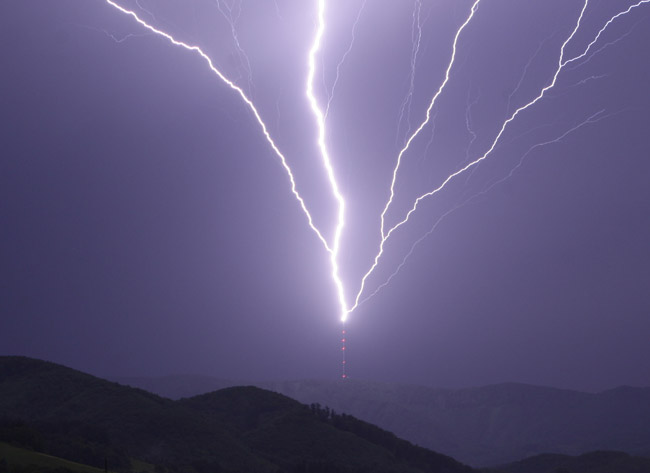 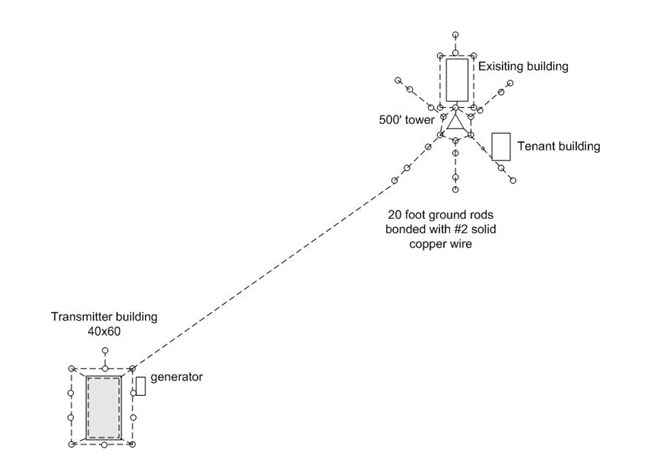 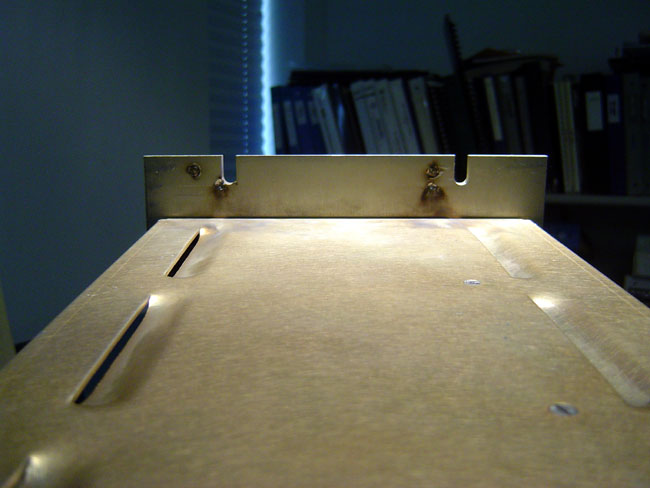 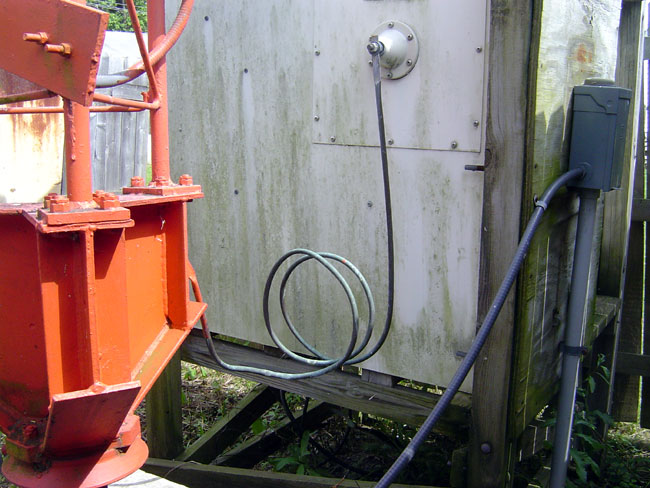 Another example from my blown up shit collection, artifacts division:

This is a Delta TCT-1HV current sample toroid that was pretty well destroyed during a thunderstorm.  I mounted it on a piece of plexi-glass because I think it looks cool.  This unit was installed at the base of the WGY transmitting tower.  One June evening, I received a call from the station operator (back when they had live operators) that the air signal sounded kind of “funny.”  So I turned on the radio and sure enough, if one thinks a radio station that sounds like a motor boat is funny, then, why yes indeed, it did sound funny.

Since I only lived a few miles away from the site, I jumped in the trusty truck and headed over.  Upon arrival, I found the MW50B on the air at full power, with the carrier power swinging wildly from 20-90 KW with modulation.  Hmmmm, bad power supply?  Turned the transmitter off and tried to place the backup transmitter on the air.  Now the old Gates BC5P had never been super reliable in the first place, but it was odd that it would not even run at all.

Then I had a hunch, lets walk out to the tower I said to my assistant who had showed up to help.  When we got to the ATU building it was filled with blue smoke.  Ah ha!  Somebody let the magic smoke out of one of the components!  I was expecting a capacitor blown in half but was surprised to fine the copper tubing that connected the ATU to the tower melted in half.  Lightning must have caused an arc between the tubing and the toroid and for some reason the transmitter kept on running while it was arcing.  The copper tubing in the picture with toroid is only missing about six inches, the way the system was mounted at the tower base, fourteen inches of copper tubing was missing, or rather melted into a puddle on the bottom of the ATU.

I quickly found another piece of 1/2 inch copper, cut it to length and flattened out the ends with a hammer and drilled mounting holes.   Luckily I was able to get everything back in order quickly and the station returned to the air about an hour or so after it went off.

Everything has a cause.  Investigation showed that the VSWR circuit on the MW50 had been disconnected from the directional coupler.  The lead was un-soldered and taped off, so it was quite intentional.  I spoke briefly with two of the three prior engineers that had serviced the MW50 over the years, they both blamed the other one.  I surmise this; The WGY tower was prone to lightning strikes because of it’s height.  Even if the tower was not directly struck by lightning, often times the guy wires would arc across the insulators, causing the MW50 to momentarily interrupt the PDM signal and drop the carrier for about a second.  Some programming people at the station did not like this, it sounded bad on the air, so one of those guys undid the VSWR circuit and voila! No more momentary outages during a thunderstorm! Brilliant!  Except for the 60-90 minute outage one night…

Sometimes it is better to tell the program directors that their idea is not good, then move on.

For about 4 years, I lived in a house next to a four hundred foot radio tower.  Although I never actually saw lightning strike the tower, I heard it several times.  Like everything else, after a while, you get used to it.

This is a video of lightning hitting the WSIX STL tower in Nashville, TN. The camera work is a little unsteady, the strike occurs around the 1:36 mark:

Most (if not all) radio engineers cringe when they here a clap of thunder.  Then the waiting begins.  What are we waiting for?  The cellphone to start ringing, of course.  Over the twenty or so years I have been doing this, I have learned a few things.  One of them is you cannot over ground something.

That being said, you can, of course, ground something improperly.

The worst areas we have for lightening damage is the Gainesville/Pensacola markets.  Those places are in the lightning capital of the US.  Time was our class C FM station was getting knocked off a couple of times a month.

There is hope.  When we upgraded the stations and installed new transmitters in 2004 I insisted that the tower and building be properly grounded.  I even got into an argument with the CFO about the “mission creep” as he put it.  Never mind that I put $20K in the initial work specification for grounding.

There are a couple of strategies to use when dealing with lightning at transmitter sites:

I have been at the Trenton Florida transmitter site when lightning struck the tower.  The result, not even a transmitter overload.  Nothing noticed on the air, no damage sustained by any equipment.  For the last five years, there has been no off air time due to lightning damage at this site.

The studio site has a similar story.  We built a new studio building in 2005, there is a 100 foot monopole that holds the STL antennas.  You know that it gets hit during a storm.  I remember the manager and IT guy from Pensacola commenting about how nice the new SAS Rubicon consoles were.  Both of them also said that they wouldn’t last through the first summer because of lightning damage.  Four years later, not a single incident of damage to the consoles, computers or anything else in the building because we grounded everything as I described above.

Proper planning and installation pays off.