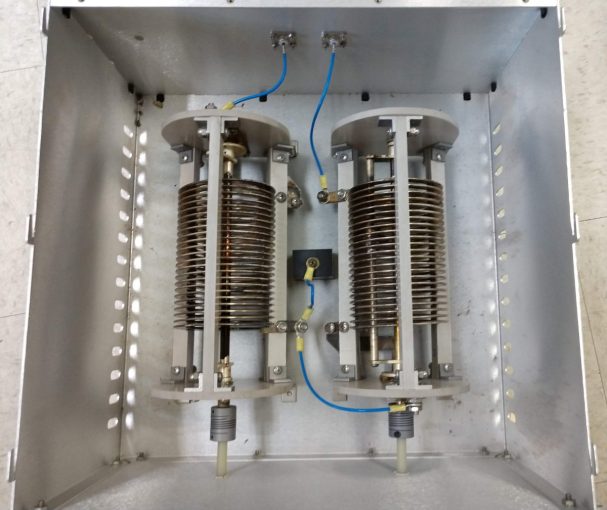 Occasional reader Scott asked for a picture of the inside of a BE AM output tuning network.  I figured it might be helpful to make a short post about it.

These things are pretty simple; a T network with a capacitive leg to ground.

This particular unit is for 1230 KHz.  I believe the capacitor is frequency determined and they may also use larger inductors for lower frequencies.

The issue with this particular unit is dirt.  The inductors have round metal plates that roll along the inductor coil to make the variable inductor tap.  Dirt has accumulated on the coil turns and on the inside of the plates.  This, in turn, causes arcing anytime the Tune or Load controls are moved.  A through cleaning should take care of the problem. 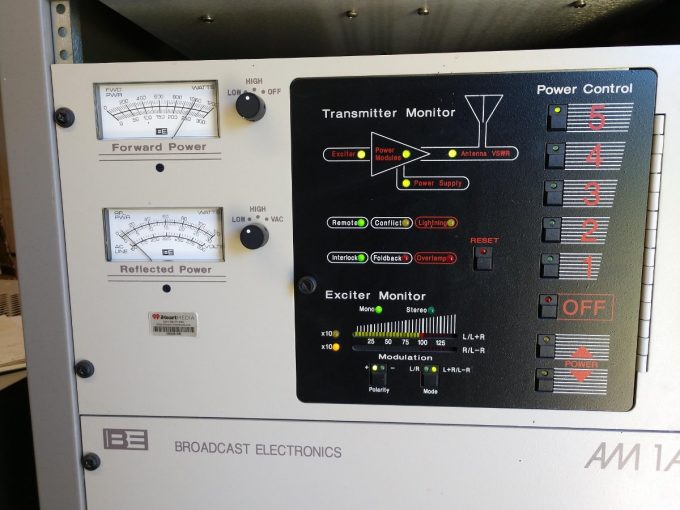 I am currently finishing an interesting project involving putting up two translators on a diplexed AM tower which also holds a mobile phone/data tenant as well.  All-in-all, this seems to be a very efficient use of vertical real estate.

The translators are W250CC and W245DA which are using a NICOM BKG-77/2 two bay 3/4 wave spaced antenna mounted at 53 meters AGL.  The translators use a Shively 2640-04/2 filter/diplexor which as a broad band input port in addition to the translator input ports.  Since these translator signals are only 1 MHz apart, the higher power Shively filter was installed because it has better rejection characteristics.  The broadband input port allows the NICOM antenna to be used as a back up for any of the three FM stations; WKBE 107.1, WNYQ 101.7, or WFFG 100.3.  Two transmitter sites for those stations are mountain top locations which are very difficult to get to in the winter time.  Having a backup site available takes some of the pressure off during storms or other emergencies.

The NICOM FM antenna was mounted on the tower when W250CC went on the air in October of 2016.  When it was installed, the base impedances for both AM stations were measured.  For some reason, WENU 1410 KHz seems to be more sensitive to any changes on the tower, thus the WENU ATU needed a slight touch up.  When working on diplexed AM systems, it is also important to make sure that both trap filters, which are parallel resonant LC circuits, are tuned for maximum rejection of the other signal.  During this particular installation, nothing was added to the tower and no change in the base impedance for either station was noted.

As a condition of the construction permit, measurement of spurious emissions of all stations sharing the common antenna needed to be completed to ensure compliance with FCC 73.317(b) and 73.317(d).  I made careful measurements of the potential intermod products between the two translator frequencies.  This measurement was completed with my TTI PSA6005 spectrum analyzer.

The primary concern here is mixing products between the two transmitters. Both transmitter are BW TXT-600 with low pass filters before the output connector. There are three frequencies of interest;

That, plus harmonic measurements out to seven or eight harmonics of the fundamental frequency should be enough to demonstrate compliance with FCC out of band emissions standards. Being that this site has LTE carriers, it is very important to measure the harmonics in those bands. Mobil data systems often use receiver pre-amps, which can amplify harmonics from the FM band and make them look out of compliance. Having a base set of reading to fall back on is always the best course in case the “out of tolerance” condition gets report to the FCC.

Measurements on these frequencies must meet the emissions standards outlined in FCC 73.317 (d), which states:

Any emission appearing on a frequency removed from the carrier by more than 600 kHz must be attenuated at least 43 + 10 Log10 (Power, in watts) dB below the level of the unmodulated carrier, or 80 dB, whichever is the lesser attenuation.

Harmonic frequencies to be measured:

*Frequencies that fall within the mobile data LTE bands. Traces where recorded and saved for these frequencies.

All of that information, once compiled is attached to the FCC form 350-FM, which, once filed grants Program Test Authority.

I have been working on another formerly direction class B AM station, this one is in Rutland, VT.  WSYB has been on the air since 1931 with the same call letters serving the east central part of Vermont.  In 1931, it was operating on 1500 kc with 100 watts of power.  In March 1941 it moved to 1490 kc with 250 watts before settling, a few months later, on 1380 with 1,000 watts, directional night time protecting CKPC in Brantford, Ontario, Canada.

The transmitter site was first located at 80 West Street (now known as BUS US 4), in Rutland.  It was moved to its current Dorr Drive (Formerly Creek Road) location in 1938, when the station was requesting a power upgrade to 250 watts.  Whilst cleaning out the old transmitter building, a copy of an operating log, dated December 7, 1945 was discovered in the attic above the transmitter room:

Back from the time when readings were required every 30 minutes.

At some point in the early 1990’s, the original towers were replaced with solid leg Pirod towers, each 195 feet tall.

After that, things went the way things do; AM steadily declined in favor of FM, local programming was mostly replaced by syndicated satellite stuff, there were several transfers of ownership, etc.

A translator on 100.1 MHz was added in 2016; the two bay Shively antenna was installed at the top of the South West tower.   There is local programming on the station from 6am to noon on weekdays.  There may also be some gardening shows and other such programming on weekends.

The current owner has decided, like they have done in other markets, that AM directional antenna systems are a maintenance nightmare, the risk of FCC sanctions are high for an out of tolerance antenna array, the ratings and income from the station do not justify the risk/cost.  Thus, non-directional night time operation was applied for and granted.  The station is now a Class D with 25 ass kickin’ night time watts.

WSYB had a two tower night time antenna system.  The tower closest to the building (SW) was also the daytime, non-directional tower and it now holds the FM translator antenna and STL antenna.  Thus, it was decided to ground that tower and keep those antennas in service.  The far tower (NE), which was the second tower of the night time array would become the AM antenna.  The night time ATU was built for less than 1,000 watts input power, so several components needed to be upgraded for 5,000 watt operation.

I had available these nice vacuum capacitors that came out of another decommissioned antenna system.  The vacuum capacitors are great because the voltage/current ratings are much higher than the mica capacitors that were in the circuit before.  You can see black goop where one of the Sangamo mica capacitors on the input leg failed several years ago.  These vacuum capacitors are rated at 15 KV and the current rating at 1.38 MHz is probably in the 70-80 amp range.  I had to move the base current meter from the former daytime (SW) tower out to the NE tower.  The day night switch was taken out of the circuit.  The transmission line to the far tower was replace with 7/8 inch foam dielectric cable.  A slight touch up of the coil on the input leg of the T network was all that was required to bring it into tune.

The electric lines to the tower have been temporarily disconnected.  As soon as they are reconnected, I will vacuum out all the mouse crap and other debris.  The ATU building also needs some work sealing in up against the elements.

For me, the magic of radio exists at that boundary between the real objects (towers and antennas) and the ether.  The transference of electrical voltages and currents into the magnetosphere is something that still fascinates me to this day.  Coupling a 5,000 watt medium wave transmitter to a tower and watching it work is something that I will never grow tired of.