This came up in one of my earlier computer classes. When installing new systems, often we are required to download applications such as web browsers, media tools, runtimes, etc individually. Ninite.com allows an IT person to create an custom installer with all of the freeware applications desired.  Once created and downloaded, this installer can be used on multiple machines across a network. 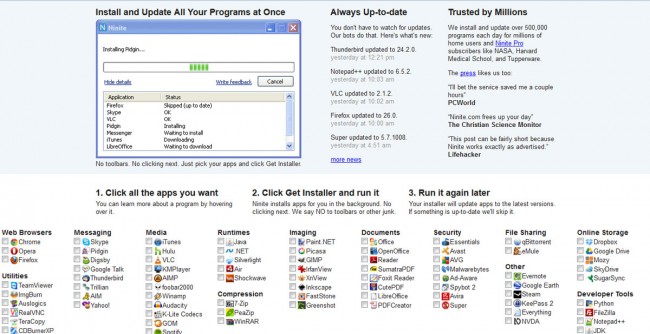 If one were using Windows Server with active directory, this installer could be either published or installed with the computer node at first boot up.

If you have not seen this Youtube video, put down the coffee (or whatever) and move any spill able things away from the keyboard and enjoy:

As more and more broadcast facilities are moving toward IP data for all types of data transfer including digitized audio, video, telephony, documents, email, applications and programs.  Managing an IP network is becoming more and more important.  In most broadcast facilities, Ethernet based IP networks have been the normal operating infrastructure for email, printing, file sharing, common programs, file storage and other office functions for many years.  Either directly or indirectly, most broadcast engineers have some degree of experience with networking.

With many more IP based audio consoles, routing systems, STL’s and other equipment coming online, understanding IP networking is becoming a critical skill set.  Eventually, all distribution of content will transition to IP based systems and the current network of terrestrial broadcast transmitters will be switched off.

The difference between an ordinary office network and an AoIP (Audio over IP) or VoIP network is the transfer consistency.  In an office network, data transfer is generally bursty; somebody moves a file or requests an HTTP page, etc.  Data is transferred quickly from point A to point B, then the network goes back to its mostly quiescent state. In the AoIP environment, the data transfer is steady state and the data volume is high.  That is to say, once a session is started, it is expected to say active 24/7 for the foreseeable future. In this situation, any small error or design flaw, which may not be noticed on an office network can cause great problems on an AoIP network.  The absolute worst kind of problem is the intermittent failure.

Monitoring and analyzing data flow on a network can be a critical part of troubleshooting and network system administration.  Data flow analysis can discover and pinpoint problems such as:

Cisco defines flow as the following:

Packet sniffers such as Wire Shark can do this, but there are far better and easier ways to look at data flow.  Network monitoring tools such as Paessler PRTG can give great insight as to what is going on with a network.  PRTG uses SNMP (Simple Network Management Protocol) on a host machine to run the server core and at least one other host to be used as a sensor.  There are instruction on how to run it as a virtual machine on a windows server, which would be the proper way to implement the server, in my opinion.

For small to medium installations, the freeware version may be all that is needed.  For larger network and major market installation, one of the lower cost paid versions may be required.

In the comments, he gets blasted for being too neat and using wire ties.  I know a lot of IT guys that are not very neat with their work and document nothing.  This is a big problem in the industry and does not, contrary to popular belief, promote job security.  I have walked into some very messy situations in wiring closets and rack rooms over the years.  My solution is always the same; run some temporary wires for critical machines/functions, then get out the big wire cutters and start chopping.