Every year, the Maritime Radio Historical Society celebrates the closing of the last commercial Morse code radio station, which happened at 0001 UTC, July 13, 1999.  They do this by re-manning the watch for a few hours in honor of all those who so diligently listened for distress signals on 500 KHz and other frequencies continuously for over 90 years.  Your humble author was one of those, who in the late 1980’s and early 1990’s strained to hear, through the static crashes and OTHR, the simple, yet effective combination of SOS sent in Morse code.

Fortunately, after the closure of KPH, the National Parks Service took over the land and preserved the buildings and antenna fields intact.  Today, a dedicated group of volunteers maintain these facilities as a working museum.  This is the earliest history of radio technology and from this, sprang Amateur Radio, then Broadcast Radio services.

So, if you have the opportunity on July 12 (Sunday, starting at 8 pm, EDT), tune around to some of the frequencies listed below and see how ship to shore communications was handled:

These are duplex frequencies, meaning; the ship transmits on one frequency and listens on to the shore station on another and vice versa.

Those medium frequencies do not carry that far during daylight, however the high frequencies should be heard across the world.

In addition to that, there are youtube videos to watch:

There are more videos on youtube, if one is so inclined.

Those old RCA transmitter look like they are in excellent condition. Somebody has spent a lot of time restoring those units.

Hopefully, one of these years, I will get a chance to head out to San Fransisco during the middle of July and see this in person. It would be nice for my children to see what their old man used to do in what seems like a different lifetime.

I found these old drawings in the filing cabinet and thought they were kind of cool. They look like they were drawn sometime in the 50’s for the WPTR studio at 1860 Central Avenue in the Town of Colonie. 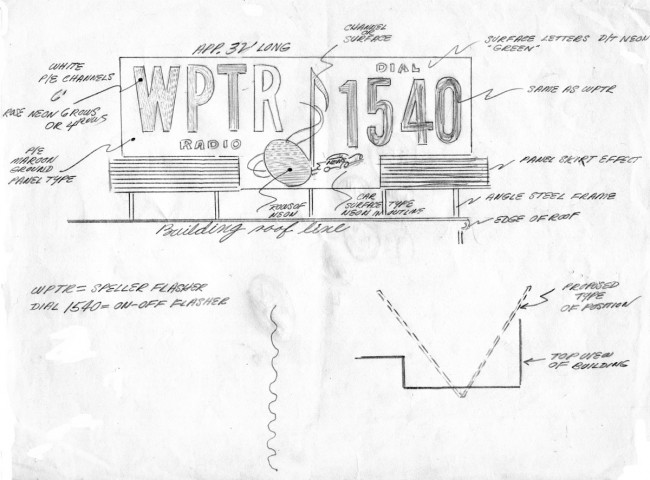 It looks like there was a lot of Neon, including a speller, which I take to mean the sign would spell “W-P-T-R 1540” then turn off again.

This was the sign for the entrance to the studio building

I think this is a take off on the old KHJ sign in Los Angeles.

Whilst working in the generator room at WFLY, I found this bit of treasure stashed on an overhead shelf:

That is a very old FM broadcast antenna from 1947-48.  It must have been intended as a spare antenna in case the main antenna had a problem.  It was never needed, so it remains in its original shipping crate.  I would think that these were rather well made, since the original main antenna was in service from 1948 until 1970 or so, when it was replaced with a Shively 6710.

The entire antenna is intact including the interbay lines, power divider T’s and tuning section.  Of course, it is of little use to the radio station today, as it is horizontally polarized.  Perhaps some museum somewhere?  I don’t know, it would be kind of neat to put it all together and use it as an exhibit.

Update and bump: I hate to rehash old stuff, but I added quite a bit of information to this post, including .pdfs of all the Barbeau letters, blue prints, etc. I’ve been doing quite a bit of work at this site lately, so it is in the front of my mind. I have also been reading about the Rural Radio Network, which covered western and central New York.

Several years ago, I rescued a old filing cabinet that was being trashed. This particular file cabinet was moved to a transmitter site during the great radio consolidation of the late 90’s and early 00’s. In it, I discovered a treasure trove of early documents about two radio stations from the Albany NY area. I thought it would be interesting to document the building of one of the early FM stations in Albany, WFLY.

Albany is the capital of New York.  There were several early (prior to 1940) AM radio stations in the Albany area:

General Electric, who worked closely with RCA in radio development and experimentation, was working on TV in 1928 and FM radio in 1938/39.  There were also several early (prior to 1950) FM stations in the area:

These stations operated from transmitter sites in the Helderberg escarpment on land that was formerly owned by the Albany Bible Institute.  It is interesting to note that two of the four FM stations did not make it past 1955. In 1967, WTRY did make a second attempt at FM, launching WDKC on 106.5 MHz, which is today known as WPYX.

It would appear the Troy Record initially applied for an FM broadcasting license in late 1946.   The paper trail that I have starts in early 1947, when the station hired consulting engineer Ernest Barbeau of Schenectady to oversee the construction process for the studios and transmitter site.  Ernest Barbeau, in an introductory letter to Frank York, publisher of the Troy Record, notes himself as a former GE engineer and assistant to W.R.G. Baker, General Electric’s television pioneer.  At the time, it was already understood the height means almost everything in FM broadcasting.  There are several letters dealing with land acquisition and transmitter building construction.

Below is a chart of all the various Barbeau letters written in 1947.  I have scanned and uploaded .pdf files of each letter, sorted by date (the entire archive is available here (6.5 Mb .zip)):

This is a treasure trove of information on how this, and perhaps other early FM and TV stations went about finding land and building remote transmitter sites.  Remember that before this, AM transmitters could be placed in any convenient location with enough space for the tower and ground system.  The line of sight nature of VHF required high locations, which in the Northeastern US,  means prominent hills or mountains.  Sadly, this paper trail goes away in 1948.

Here are some of the highlights found in the letters above:

In addition to the construction, there was quite a bit difficulty from the WBCA management, who were concerned about possible interference.  WBCA was part of the “Continental Network” and received most of it’s network programing via direct over the air relay from W2XMN/W31NY, 43.1 MHz, in Alpine, NJ.  They complained to the FCC about potential interference on both their over air network relay (43.1 MHz) and the Studio to Transmitter Link from downtown Schenectady on 950 MHz.  In the end, the FCC was unimpressed with these arguments and granted WFLY its operating license.

The transmitter building was made twice as large as needed because the Record had plans to launch a TV station and possibly a radio facsimile service.  In addition to this, there were complete living quarters on the second floor which included a bathroom, shower, kitchen, bedroom and large living room area.  This was in the era before remote controlling of transmitters was permitted by the FCC.  It took a hardy soul to live at the remote transmitter site full time.  Even today, it is far outside of town and can be difficult to get to in the winter time

These mountain top transmitter sites did not exist prior to the advent of TV and FM.  The amount of planing and work went into launching this station is quite impressive. For the early FM radio stations, this type of effort and expense was probably typical.